The South Dakota Supreme Court yesterday began hearing arguments in a lawsuit filed against the city of Sioux Falls in the case of a 2016 building collapse that killed a worker and seriously injured another person. The suit was brought by the family of Emily Fodness, who was trapped in debris for several hours when a building being remodeled by Hultgren Construction, LLC collapsed. Construction worker Ethan McMahon died in the incident.
Read More

An employee of an Iowa hog operation has died of his injuries, a month and a half after being burned in a workplace fire. News reports say 38-year-old Jorge Orozco died Saturday at St. Elizabeth Burn Center in Lincoln, Nebraska.
Read More

The 2016 case of a worker killed by an electric shock while repairing a ceiling light fixture came to a close recently, with an administrative law judge affirming OSHA citations issued to the man’s employer. The fatality involved a worker who was untrained in electrical safety work practices. The Occupational Safety and Health Review Commission (OSHRC) judge ruled that Jersey City Medical Center willfully failed to train the employee for the hazardous electrical work he was directed to perform.
Read More

An arrest has been made in the case of a Louisiana letter carrier who was shot and killed while bringing mail to the home of his assailant, but the motive – if there was one – remains a mystery. News reports say 32-year-old Michael Gentry was arrested in the incident, which occurred in Shreveport.
Read More 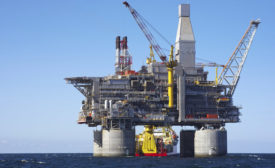 An oil and gas worker on a Talos Energy LLC platform in the U.S. Gulf of Mexico was killed on Saturday, February 17 while replacing piping, the Bureau of Safety and Environmental Enforcement (BSEE) reproted. The worker was injured while removing out-of-service fire suppression equipment and later died as a result of the injuries. No other personnel were injured and there was no fire or release as a result of the accident, Talos said in a statement.
Read More

A 52-year-old maintenance employee at a Nebraska feed company was clearing crusted corn from the sides of a grain bin when a wall of corn collapsed and buried him in hundreds of pounds of debris. Rescued by emergency crews, he died of his injuries two days later.
Read More
Subscribe For Free!
More Videos

New reports says illness, injury, fatalities, and $100 billion is the cost of heat stress inaction by employers each year