Railway safety, a deadly trench collapse and a big uptick in workers testing positive for drug use were among the top EHS-related stories featured on ISHN.com this week.

Testimony before a congressional hearing earlier this month blamed investigative delays at the U.S. Chemical Safety Board (CSB) – and the exodus of CSB personnel that’s contributing to the backlog – on poor leadership by Chairman Rafael Moure-Eraso.

Another delay for OSHA’s silica rule, a pipeline explosion in Canada and workplace violence prevention training for nurses were among this week’s top EHS-related stories featured on ISHN.com. 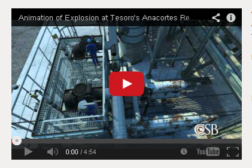 The CSB has released a new computer animation recreating the explosion and fire that killed seven workers at the Tesoro Refinery in Anacortes, Washington on April 2, 2010. The incident occurred when a nearly forty-year-old heat exchanger catastrophically failed during a maintenance operation to switch a process stream between two parallel banks of exchangers at the refinery.

The April 2, 2010, explosion and fire that fatally injured seven employees at the Tesoro Refinery in Anacortes, Washington was caused by a faulty heat exchanger, according to the U.S. Chemical Safety Board (CSB), which will officially wrap up its investigation into the tragedy at a meeting later this month.