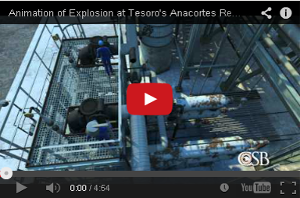 The Chemical Safety Board (CSB) has released a new computer animation recreating the explosion and fire that killed seven workers at the Tesoro Refinery in Anacortes, Washington on April 2, 2010.

The incident occurred when a nearly forty-year-old heat exchanger catastrophically failed during a maintenance operation to switch a process stream between two parallel banks of exchangers at the refinery.

The five-minute animation illustrates the process of "high temperature hydrogen attack," which over the years damaged and weakened a nearly forty-year-old carbon steel heat exchanger, leading to a catastrophic rupture on the night of the accident. The CSB investigation concluded that the accident at Tesoro could have been prevented had the company replaced the vulnerable carbon steel heat exchangers with inherently safer alloys that were already well known within the industry, but not required.

The animation also explains that seven workers were present on the night of the accident assisting with startup of the heat exchangers - mitigating recurring leaks never adequately addressed by Tesoro, and manually opening a series of long-winded valves. All seven lost their lives as a result of the blast.

Click here to read about the CSB investigation report.

New CSB video shows how to design for safety