The price of not slowing in highway construction zones

Failure to slow down in construction zones contributed to two major accidents on Interstate 70 in Illinois in recent weeks, according to an article in the Effingham Daily News in Illinois.

I-75 construction in Ohio leaves “little room for error”

A 32-mile stretch of interstate where construction began in June, 2014 to repair the interstate and widen it from two lanes to three lanes in each direction (a $261 million project) has gone hand in hand with a significant increase in crashes during the last year, according to local police, according to an article in the Toledo Blade. 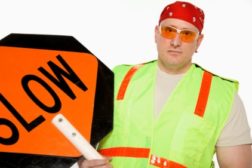 Better weather means an increase in highway construction projects across the U.S., with a corresponding increase in danger for those working on those projects. The U.S. Department of Transportation’s Federal Highway Administration (FHWA) says that highway improvement projects being performed on roadways that are open to traffic are expanding as the nation’s highway infrastructure ages and agencies focus on rebuilding existing roadways instead of building new ones.