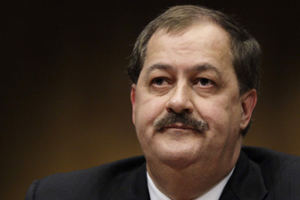 A federal grand jury in Charleston, West Virginia yesterday indicted former Massey Energy CEO Don Blankenship for routinely violating federal mine safety rules at the Upper Big Branch Mine, leading to one of the worst mining disasters in U.S. history. The indictment is the latest in a long line of legal actions stemming from the April 2010 explosion at UBB, which killed 29 miners.

The four-count indictment that was filed in U.S. District Court charges Don Blankenship with conspiring to cause willful violations of ventilation requirements and coal dust control regulations as well as hindering Mine Safety and Health Administration (MSHA) enforcement efforts by providing advance warnings of government inspections “so their underground operations could conceal and cover up safety violations that they routinely committed,” according to a statement released by the U.S. attorney.

The indictment alleged “near-constant” violations of dust-control rules on the part of Massey and relentless pressure by Blankenship – sometimes conveyed in handwritten notes – to increase production and cut costs.

An attorney for a number of coal miners’ families said this is the first time he can recall of the CEO of a major coal company being held criminally accountable for the company’s actions.

The counts constitute three felonies and one misdemeanor. If convicted, Blankenship could face up to 31 years in prison.

According to the indictment: “Blankenship knew that UBB was committing hundreds of safety-law violations every year and that he had the ability to prevent most of the violations that UBB was committing. Yet he fostered and participated in an understanding that perpetuated UBB’s practice of routine safety violations, in order to produce more coal, avoid the costs of following safety laws, and make more money.”

The indictment further alleges that after the explosion at UBB, Blankenship lied to the SEC about Massey Energy’s safety practices prior to the explosion and about the purchase and sale of Massey Energy stock. In an effort to shore up the company's stock prices - which fell after the UBB disaster -- Blankenship defended the company's safety practices in an SEC filing. According to the indictment, Blankenship knew the statements he made at that time were “materially false, fraudulent, fictitious and misleading” and that the statements “would act as a fraud and a deceit upon purchasers” of Massey stock.

As a major stockholder in Massey Energy, Blankenship's personal fortune was also at stake.

A mine safety "advocate"?

Blankenship, known as a micromanager during his nearly 20 years at Massey, has denied any wrongdoing. In a statement, his attorney described him as “a tireless advocate for mine safety” who was persecuted for political reasons.

Critics have long argued that Massey consistently put coal production and profits ahead of worker safety.

Four separate investigations blamed the UBB disaster on a pattern by Massey of violating federal ventilation and dust control standards, which enabled a small methane ignition to transform into a massive explosion.

Blankenship gets a year behind bars in UBB mine disaster