What psychology says about materialism and the holidays 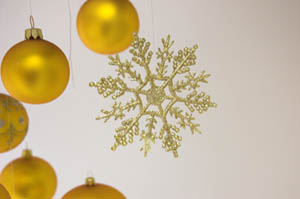 Would the holidays be the same without some materialism in the mix? In today’s consumer society, what does it mean to be materialistic, and is that necessarily a bad thing? Psychologists have conducted research that has helped answer those questions and many more.

Tim Kasser, PhD, is a professor of psychology at Knox College in Galesburg, Illinois, specializing in materialism and well-being. Among Kasser’s numerous articles and books are “The High Price of Materialism,” published in 2002, and “Psychology and Consumer Culture” in 2004. A former associate editor of APA’s Journal of Personality and Social Psychology®, Kasser earned his PhD in psychology from the University of Rochester.

Kasser: To be materialistic means to have values that put a relatively high priority on making a lot of money and having many possessions, as well as on image and popularity, which are almost always expressed via money and possessions.

I think materialism is viewed in a negative light because people may have had unpleasant experiences with materialistic people. We know from research that materialism tends to be associated with treating others in more competitive, manipulative and selfish ways, as well as with being less empathetic. Such behavior is usually not appreciated by the average person, although it is encouraged by some aspects of our capitalist economic system.

APA: How have media, particularly social media, influenced materialism in the world today?

Kasser: The research shows that the more that people watch television, the more materialistic their values are. That’s probably because both the shows and the ads send messages suggesting that happy, successful people are wealthy, have nice things, and are beautiful and popular. One has to remember that, in the U.S. at least, the vast majority of media are owned by a few for-profit corporations that make money by selling advertising, and the purpose of advertising is to sell products.

A study I recently published with psychologist Jean Twenge tracked how materialism has changed in U.S. high school seniors over a few decades and connected those changes with national advertising expenditures. We found that the extent to which a given year’s class of high school seniors cared about materialistic pursuits was predictable on the basis of how much of the U.S. economy came from advertising and marketing expenditures — the more that advertising dominated the economy, the more materialistic youth were.

One study of American and Arab youth found that materialism is higher as social media use increases. The findings suggest that, just as television use is associated with more materialism, so is use of social media. That makes sense, since most social media messages also contain advertising, which is how the social media companies make a profit.

While materialism is a risk factor for compulsive consumption, they are not the same thing. Another psychologist, Miriam Tatzel, suggests that some materialists are “loose” with their money and some are “tight.” Both types of people care about having money and possessions, but the loose materialist is going to spend and spend and spend, whereas the tight materialist will be more like Scrooge or Silas Marner, trying to accumulate wealth.

APA: What might be some positive aspects of materialism?

Kasser: We know from the literature that materialism is associated with lower levels of well-being, less pro-social interpersonal behavior, more ecologically destructive behavior, and worse academic outcomes. It also is associated with more spending problems and debt. From my perspective, all of those are negative outcomes.

But from the point of view of an economic/social system that relies on spending to drive high levels of profit for companies, economic growth for the nation and tax revenue for the government, consumption and over-spending related to materialism may be viewed as a positive.

APA: What does psychological research say about materialism’s link to happiness?

Kasser: The connection between materialism and well-being is the longest-standing strand of research in the materialism literature. My colleagues at the University of Sussex and I recently published a meta-analysis that showed the negative relationship between materialism and well-being was consistent across all kinds of measures of materialism, types of people and cultures. We found that the more highly people endorsed materialistic values, the more they experienced unpleasant emotions, depression and anxiety, the more they reported physical health problems, such as stomachaches and headaches, and the less they experienced pleasant emotions and felt satisfied with their lives.

The most supported explanation for why well-being is lower when materialism is high concerns psychological needs. Specifically, materialistic values are associated with living one’s life in ways that do a relatively poor job of satisfying psychological needs to feel free, competent and connected to other people. When people do not have their needs well-satisfied, they report lower levels of well-being and happiness, as well as more distress.

APA: How does religious faith affect materialism, particularly during the holiday season?

Kasser: A couple of studies have found that the negative relationship between materialism and well-being is even stronger for people who are religious. This is probably because there is a conflict between materialistic and religious pursuits. That is, research on how people’s values are organized has shown that some goals are easy to simultaneously pursue, but others are in tension or conflict with each other. For example, it is relatively easy to focus on goals for money at the same time one focuses on goals for image and popularity, as those goals all are related and facilitate each other. The research shows there is a tension between materialistic goals and religious pursuits, just as Jesus, Muhammad, Buddha, Lao Tze and many other religious thinkers have long suggested. It seems that trying to pursue materialistic and spiritual goals causes people conflict and stress, which in turn lowers their well-being.

One study has shown that this plays out during Christmas, too. Psychologist Ken Sheldon and I co-authored a study that found that to the extent people focused their holiday season around materialistic aims like spending and receiving, the less they were focused on spiritual aims. We also found that people reported “merrier” Christmases when spirituality was a large part of their holiday, but reported lower Christmas well-being to the extent that the holiday was dominated by materialistic aspects.