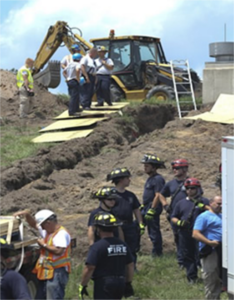 Clyde Nettles Jr. was in an unprotected trench reconnecting drainpipes at Fort Bragg on July 24, 2014, when, without warning, the walls collapsed around him and another worker. The other worker was able to escape uninjured, but 22-year-old Nettles was not.

After investigating the incident, OSHA has cited Tekton Construction Co. for two willful and two serious safety violations. The tragedy occurred while Tekton workers were digging trenches and installing drainpipes at an ammunition supply point.

"Tekton was well aware of the dangers associated with entering unprotected trenches, yet the company disregarded OSHA standards. Sadly, a young man was killed as a result," said Kim Morton, director of OSHA's Raleigh Area Office. "His life could have been saved and this incident prevented if the company put proper safeguards in place to protect its workers."

Willful citations were issued to Tekton for not providing cave-in protection to employees working in a trench and not providing safe means to enter and exit the trench. OSHA requires that for every 25 feet of length of a trench, a safe exit must be installed. In this case, three of the trenches were longer than 62 feet without exits installed.

OSHA also requires that all trenches and excavation sites 5 feet or deeper be protected against sidewall collapses. Protection may be provided through shoring of trench walls, sloping of the soil at a shallow angle, or by using a protective trench box. OSHA has created a National Emphasis Program on Trenching and Excavation.

Tekton also received serious citations for not providing protective hard hats to employees inside trenches and for failure to train workers to identify and avoid hazardous working conditions. OSHA proposes that Tekton be placed in the Severe Violator Enforcement Program for demonstrating indifference to its OSH Act obligations to provide a safe and healthful workplace for employees.