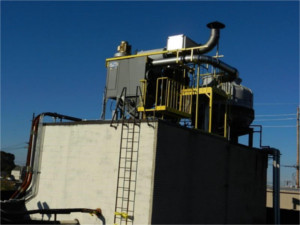 The flash fire that burned seven workers, one seriously, at a U.S. Ink plant in New Jersey in 2012 resulted from the accumulation of combustible dust inside a poorly designed dust collection system that had been put into operation only four days before the accident, an investigation by the U.S. Chemical Safety Board (CSB) has found.

Only took one day

In a report released recently. the investigation team concludes that the system was so flawed it only took a day to accumulate enough combustible dust and hydrocarbons in the duct work to overheat, ignite spontaneously, cause an explosion in the rooftop dust collector, and send back a fiery flash that enveloped seven workers.

U.S. Ink is a subsidiary of Sun Chemical, a global graphic arts corporation which has some 9,000 employees worldwide. U.S. Ink manufactures black and color-based inks at seven U.S. locations including East Rutherford. A key step in the ink production process is mixing fine particulate solids, such as pigments and binders, with liquid oils in agitated tanks.

CSB Chairperson Rafael Moure-Eraso said, “The findings presented in the CSB report under consideration show that neither U.S. Ink nor its international parent company, Sun Chemical, performed a thorough hazard analysis, study, or testing of the system before it was commissioned in early October 2012. The original design was changed, the original company engineer retired prior to completion of the project, and no testing was done in the days before the operation of the black-ink pre-mixing room production was started up.”

The CSB found that the ductwork conveyed combustible, condensable vapors above each of three tanks in the mixing room, combining with combustible particles of dust of carbon black and Gilsonite used in the production of black ink.

Investigation Supervisor Johnnie Banks said, “The closed system air flow was insufficient to keep dust and sludge from accumulating inside the air ducts. But to make matters worse, the new dust collector design included three vacuuming hoses which were attached to the closed-system ductwork, used to pick up accumulated dust, dirt and other material from the facility’s floor and other level surfaces as a ‘housekeeping’ measure. The addition of these contaminants to the system ductwork doomed it to be plugged within days of startup.”

The report describes a dramatic series of events that took place within minutes on October 9, 2012. About 1 p.m., an operator was loading powdered Gilsonite, a combustible carbon-containing mineral, into the bag dump station near the pre-mixing room when he heard what he called a strange, squealing sound. He checked some gauges in the control room, and as he was leaving he saw a flash fire originating from the bag dump where he had just been working. He left to notify his supervisor. At about that same time, other workers heard a loud thump that shook the building.

In response to the flash from the bag dump station and the thump, workers congregated at the entrance to the pre-mix room. One worker spotted flames coming from one of the tanks. He obtained a fire extinguisher but before he could use it, he saw an orange fireball erupt and advance toward him. He squeezed the handle on the extinguisher as he jumped from some stairs, just as the flames engulfed him and six other employees who were standing in the doorway.

The CSB determined that overheating and spontaneous ignition which likely caused the initial flash fire at the bag dump was followed by ignition of accumulated sludge-like material and powdery dust mixture of Gilsonite and carbon black in the duct work above tank 306. Meantime, the dust collection system, which had not been turned off, continued to move burning material up toward the dust collector on the building’s roof, where a sharp pressure rise indicated an imminent explosion. This was contained by explosion suppression equipment, but the resulting pressure reversed the air flow, back to the pre-mix room, where a second flash fire occurred, engulfing the workers.

Investigation Supervisor Banks said, “The new system was not thoroughly commissioned. There was no confirmation of whether the system would work as configured, missing opportunities to find potential hazards. The design flaws were not revealed until the dust explosion.”

A lack of oversight

The report’s safety management analysis points to a lack of oversight by company engineers of the work done by installation contractors. The company chose not to perform a process hazard analysis or management of change analysis – required by company policy for the installation of new processing equipment – because it determined it was merely replacing a previous dust collection system in kind. However, the new system in fact was of an entirely different design.

Considering the emergency response following the flash fire and dust collector explosion, CSB Investigators found that while workers had received training in emergency response situations, they did not follow those procedures, because U.S. Ink had not developed and implemented an effective hazard communication and response plan. A fire coordinator was designated to use the public address system to announce a fire and also pull the alarm box. But because the system was not shut down immediately after the first flash fire, he was among the injured and could not perform his duties.

The CSB report’s regulatory analysis highlights the need for a national general industry combustible dust standard which the agency has long recommended that OSHA promulgate, putting in on the CSB’s “Most Wanted” list in 2013, following years of urging action as dust explosions continued to occur in industry. The report, if adopted by the board, would reiterate the CSB’s original recommendation to OSHA, and also recommend OSHA broaden the industries it includes in its current National Emphasis Program on mitigating dust hazards, to include printing ink manufacturers.

Chairperson Moure-Eraso said, “Although OSHA’s investigation of this accident deemed it a combustible dust explosion, it did not issue any dust-related citations, doubtless hampered by the fact that there is no comprehensive combustible dust regulatory standard. In U.S. Ink’s case – and thousands of other facilities with combustible dust – an OSHA standard would likely have required compliance with National Fire Protection Association codes that speak directly to such critical factors as dust containment and collection, hazard analysis, testing, ventilation, air flow, and fire suppression.”

The CSB report notes that the volume of air flow and the air velocity in the company’s dust collection system was significantly below industry recommendations – which, in the absence of a federal combustible dust regulation, are essentially voluntary. The report states the ductwork design did not comply in several respects with guidelines set by the American Conference of Governmental Industrial Hygienists (ACGIH) Industrial Ventilation Manual. Nor did the system’s design, the CSB said, comply with the voluntary requirements of NFPA 91, which states: “All ductwork shall be sized to provide the air volume and air velocity necessary to keep the duct interior clean and free of residual material.”

Chairperson Moure-Eraso said, “A national combustible dust standard would include requirements to conform to what are now largely voluntary industry guidelines and would go far in preventing these dust explosions.”

The report cites gaps in New Jersey’s regulatory system, noting the state’s Uniform Construction Code Act has adopted the International Building Code (which references NFPA dust standards) but has also exempted “manufacturing, production and process equipment.”  A proposed CSB recommendation to New Jersey’s Department of Community Affairs calls on the regulatory agency to revise the state’s administrative code to remove this exemption so that dust handling equipment would be designed to meet national fire code requirements. The state is also urged to implement training for local code officials as local jurisdictions enforce the code, and to promulgate a regulation that requires all occupancies handling hazardous materials to inform the local enforcement agency of any type of construction or installation of equipment at an industrial or manufacturing facility.

Chairperson Moure-Eraso said, “Events leading to this accident began even before the earliest planning stages, when the company failed to properly oversee the design, construction and testing of a potentially hazardous system. The victims have suffered the consequences. We hope our recommendations are adopted so that these terrifying industrial dust explosion accidents will stop.”