Roofer falls to death, co-worker injured trying to save him 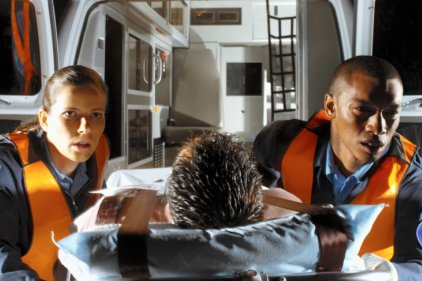 A 42-year-old worker fell 16 feet to his death and a 25-year-old co-worker suffered serious injuries because their employer, Roeder Construction, failed to provide either man with fall protection as they worked on a roof, an OSHA investigation has determined.

The two men were installing a heavy-duty, weatherproof tarpaulin on Sept. 15, 2014, on a residential home in Grand Island, Nebraska. OSHA's investigation found that one employee lost his balance and started falling. The second man tried to stop his co-worker's fall, and the momentum carried both employees off the roof to the ground. As a result, one worker died of his injuries two days later, while the second was treated and released from a local hospital with torn ligaments and bruising. Both employees had been with the company for a little more than a month, but had previous roofing-industry experience.

Fatal falls, slips or trips took the lives of 699 workers in 2013 and are the leading cause of death in the construction industry. About one-half of the 1.6 million American construction employees work in residential construction.

"This tragedy illustrates how quickly a worker can be fatally injured without fall protection and why OSHA requires it," said Bonita Winingham, OSHA's area director in Omaha. "When working at heights, everyone needs to plan ahead to get the job done safely. Each year, hundreds of workers die needlessly and the families suffer as a result of falls like this one.."

OSHA found that Roeder, based in Kearney, Neb., committed two serious and one other-than-serious safety violation. The company did not provide fall protection and train employees in its use, resulting in the issuance of two serious violations.

An additional violation was cited for failing to report the workplace fatality within eight hours. OSHA has proposed penalties of $7,600.

OSHA maintains a Web page with detailed information in English and Spanish on fall protection standards. The page offers fact sheets, posters and videos that vividly illustrate various fall hazards and appropriate preventive measures. OSHA standards require that an effective form of fall protection be in use when workers perform construction activities 6 feet or more above the next lower level.

OSHA's ongoing Fall Prevention Campaign provides employers with lifesaving information and educational materials on how to create a plan to prevent falls, provide the right equipment for workers and train employees to use that equipment properly. The campaign launched in 2012. It was developed in partnership with the National Institute for Occupational Safety and Health andNIOSH's National Occupational Research Agenda program.

Based in Kearney, Roeder Construction has 15 business days from receipt of its citations and penalties to comply, request an informal conference with OSHA's area director, or contest the findings before the independent Occupational Safety and Health Review Commission.