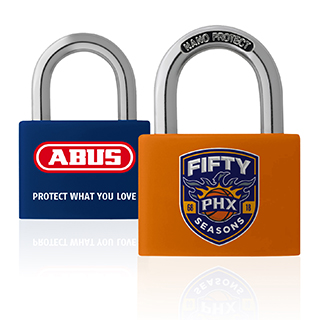 ABUS, a worldwide industry leader in safety and security solutions, today announced a new strategic marketing partnership agreement with the Phoenix Suns that designates ABUS as the “Official Lock of the Phoenix Suns.” The first-of-its-kind category partnership for the Suns is also the first U.S. sponsorship for ABUS, whose North American operations are headquartered in Phoenix.

“We are excited to partner with a world-class organization such as the Phoenix Suns,” said Johannes Bremicker, President and CEO, ABUS USA. “This agreement is part of our corporate strategy to extend the brand visibility of ABUS in the U.S. Also headquartered in the Valley, we feel the Suns are a perfect match as we both have a strong history of success and are building for an even greater future.”

Together, the Suns and ABUS are encouraging fans to “Protect what you love” and as part of the multi-year agreement, ABUS will have a prominent presence in and around Talking Stick Resort Arena, home of the Suns. For the first time, ABUS has produced a TV commercial that will air during Suns’ broadcasts and on digital channels. In addition, ABUS will give away limited edition co-branded padlocks and tickets to Suns’ home games. Details can be found at suns.abus.com.

In celebration of the newly-forged partnership, Suns rookie Josh Jackson, who is projected to be one of the team’s key defenders, will open the Suns locker room to fans around the world and host a unique behind-the-scenes tour on the Suns’ Facebook page on Thursday, Oct. 12 at 7 p.m. (Phoenix time).

Starting in the 2018 season, ABUS and the Phoenix Mercury will also team up for the “Brittney Blocks” initiative, a promotion that will donate money to the charity of ABUS’ choice each time Mercury center Brittney Griner records a blocked shot during the 2018 WNBA season. Griner, who earned back-to-back WNBA Defensive Player of the Year honors in 2014 and 2015, has blocked 552 shots in 173 career games (including playoffs) and led the WNBA with 2.5 blocks per game during the 2017 season.

The Phoenix Suns are Arizona’s original sports franchise and will celebrate their 50th season in the Valley during the 2017-18 NBA campaign. The Suns have been regarded as one of the most successful NBA franchises on and off the court. Since entering the league in 1968, the Suns own the fourth-best winning percentage all-time in the NBA.

Since 1924, ABUS provides a good feeling of security. The products of the German manufacturer distinguish themselves through a high level of reliability and longevity while still being very easy to use. ABUS provides a large product range of innovative solutions for home security, safety lockout, commercial security and recreational security. The ABUS group is headquartered in Wetter, North-Rhine Westphalia, Germany and is made up of more than 20 subsidiaries worldwide distributing security products in over 100 countries.