From the NSC show: 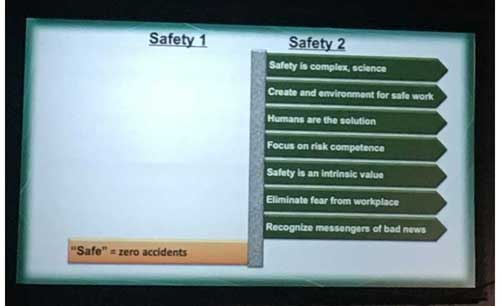 He spoke about three different levels of safety. He said Safety 1 is about seeking to eliminate human error, which is futile because, “in safety, we don’t know what we don’t know.”

Safety 2 accepts that human errors will always occur and cannot be prevented. Contrary to popular opinion on workplace safety, Pitzer cautioned on the dangers of making workplaces too safe.

“Our employees don’t understand risk because we protect them,” he said. “They have to get back to understanding risk.”

He used an example of young children who sometimes do not understand the risks of life because they usually play in sheltered, safe playgrounds. Because of that, they often don’t think when darting into oncoming traffic because they feel they are always safe due to not experiencing risk.

Safety 3 is coming in the next 10 to 15 years, Pitzer said. He thinks the future of safety will not rely on audits, inspection numbers and recordable statistics.