This website stores data such as cookies to enable important site functionality including analytics, targeting, and personalization. View our privacy policy.
Home » 7-year-old falls, killed by subway train
Only on the WebToday's NewsTransportation Safety
Safety signage changes after accident

Was a warning sign too small? Too high for a child to see?

A single sign at the top of a door warning that passengers should not use the end-of-car doors to pass between cars is part of a National Transportation Safety Board (NTSB) investigation into a recent passenger death involving a Southeastern Pennsylvania Transportation Authority (SEPTA) subway train.

A 7-year-old boy attempting to walk from one car to another through the end-of-car doors fell between the cars and was killed.

Just ten feet from the station 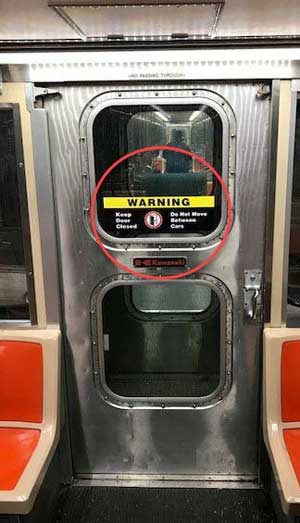 The Sept. 23, 2018 incident occurred as the train was pulling out of the Alleghany Station through an underground tunnel. A passenger immediately activated an emergency alert and the train was stopped. The train operator found the child between the running rails, about ten feet south of the station platform.

NTSB investigators interviewed SEPTA System Safety and Transportation Management officials who indicated that although passengers are permitted to walk between the cars, this action is highly discouraged. At the time of the accident, SEPTA Broad Street Line subway end-of-car doors were equipped with a singular sign warning that passengers should not use the end-of-car doors to pass between cars. The sign read “NO PASSING THROUGH,” and is located between an overhead light bar and the top of the door. In the photograph above, the sign is magnified and circled in red.

Immediately after the accident, SEPTA officials began placing larger and more prominent warning signs on the interior of the end-of-car doors on the entire SEPTA subway fleet (shown at right). SEPTA also began making station and on-board train announcements to remind passengers that the end-of-car door passage is for emergency use only.

The NTSB’s investigation into this accident is ongoing. Future investigative issues include risk assessments of gangways between end-of-car doors and strategies to mitigate the identified risks.