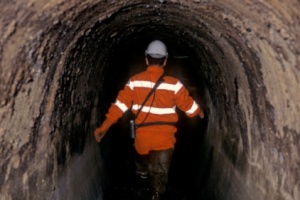 Although a blown fuse led to a worker fatality in a tunnel in NY, OSHA says a lack of safety measures placed the man in danger in the first place.

Fort Worth, Texas-based tunneling company Southland Contracting Inc. was cited seven violations of workplace safety standards after one of its employees was killed at the Eastside Water Supply Project in Webster.

On April 11, Southland employees were performing tunneling operations in the raw water intake tunnel when a fuse blew after a piece of equipment was plugged into a branch circuit designed for temporary lighting, causing the lights in the tunnel to go out. In the darkness, an employee who was operating a locomotive sustained a fatal head injury when he struck a conveyor on the tunnel boring machine.

OSHA found that the locomotive lacked bumper blocks to stop it as it approached the conveyor, it was pushing an unattached flat car, and it had not been inspected for modifications and repairs. Furthermore, there was no effective means by which the workers in the tunnel could notify the locomotive operator of problems while he was in transit. Additionally, the welding equipment was plugged into branch circuits meant only for temporary lighting, and the site had not been inspected by a competent person prior to the work beginning.

These conditions resulted in citations for six serious violations.

"An unfortunate and unnecessary confluence of conditions placed the workers in the tunnel at risk of being struck, crushed or caught in and between the locomotive and the tunnel boring machine," said Arthur Dube, OSHA's area director for western New York. "An inspection by a person with the knowledge to identify and the authority to eliminate these hazards could have prevented this worker's death."

One repeat violation was cited for failing to instruct workers in the recognition and avoidance of "struck-by," "caught-in" and crushing hazards associated with tunnel boring and locomotive equipment.

OSHA regional director Robert Kulick urged employers to develop, implement and maintain an illness and injury prevention program in which management and workers proactively and continually identify and eliminate hazardous conditions before they harm workers.