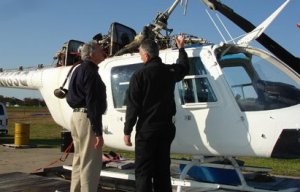 The National Transportation Safety Board (NTSB) has released preliminary information about it's investigation into the deadly crash of a private helicopter in New York's East River Oct. 4th. One passenger was killed and two sustained serious injuries in the accident. The pilot and an additional passenger were not injured

The pilot -- who had commercial certification -- told NTSB investigators that he was taking friends on a local sightseeing flight. He landed at a heliport on East 34th street to pick up the four passengers.

"The helicopter climbed to a pilot-estimated altitude between 30 to 50 feet over the East River. Shortly thereafter, the pilot experienced a problem which included a small left yaw. He then initiated a right turn to attempt to return and land at the heliport but the helicopter became uncontrolled and impacted the water. After water entry, the helicopter rolled inverted," according to the report.

The portion of the helicopter that was recovered from the river was transported to a hanger for examination, as was the engine. Most of the main rotor blade broke off from the helicopter upon impact and was not found.

The pilot held a commercial pilot certificate with ratings for airplane single-engine land, airplane multiengine land, and rotorcraft helicopter. He reported a total flight experience of 2,287 hours, of which 1,500 hours were in helicopters, including 420 hours in the same make and model as the accident helicopter.

The helicopter was manufactured in 1976 and was inspected most recently on on October 2, 2011. At that time, the helicopter had accumulated approximately 11,580 total flight hours.