Know the risks of radiation 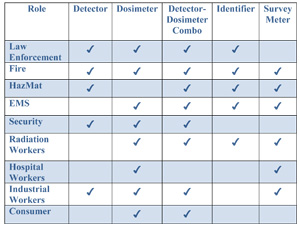 Exposure to high levels of radiation can be dangerous. Because radiation is odorless and invisible, those who must work with radioactive materials need special equipment to ensure their safety and the safety of those around them. Therefore, speed, accuracy and reliability are more important than ever in radiation detection instruments used to assess radioactive threats and to guide life-saving decisions.

All personnel who work with radioisotopes need different detection and measurement devices. Knowing more about radiation and how to detect it can help keep industrial hygienists, first responders and the public safe from overexposure.

The fundamental principle of radiation safety is to reduce exposure to ionizing radiation and its source. The goal is to maintain exposure to As Low As Reasonably Achievable, or ALARA. The three factors influencing radiation dose are time, distance and shielding, so the best ways to protect yourself are to limit your time near the radiation source; put distance between you and the source; and/or increase the amount of shielding material between you and the source.

An identifier uses the differences in radiation emission energies to determine which radioisotope is present. Identifiers are mainly used to identify an unknown radioactive source or contamination. Identifiers are expensive, and a single unit can cost more than $10,000.

Survey meters measure radiation levels using the same radiation sensors employed in detectors and dosimeters. These have a probe that’s held in one hand, while the meter box is held in the other. Each probe is specifically tailored to a particular type of radiation, and can measure gamma, neutron, alpha or beta radiation levels. Cost of a survey meter can range from $1,000 to $20,000.

Most people only need one or two types of devices, which, when used properly, can make their jobs easier and safer.

Personnel entering areas where the radioactive material is stored should wear a personal radiation detector to alert them of any leaking sources and high dose rate areas. Workers at refineries and chemical plants must wear intrinsically safe equipment, especially during plant turnarounds.

Each radiation worker should wear a dosimeter when entering a radiation area. Dosimeters are used because it is known that there is radiation in the area, and by law the dose to each worker must be carefully tracked.

First responders need the most rugged and fastest responding equipment possible that includes intrinsic safety, water, shock and EMI resistance, ease of operation while wearing several layers of gloves, and illuminated, easy-to-read displays. Since HazMat responders may be exposed to more significant amounts of radiation, a detector-dosimeter combination instrument is ideal. A survey meter or detector should be used to determine a safe distance from the source.

The proper use of appropriate radiation detection can help protect the industrial hygienist and the public. New technologies have been developed to organize, simplify and better meet the challenges that face you on a daily basis.

Selecting the right equipment can be challenging. Things to consider when selecting a radiation-detection instrument include:

• How important is speed-of-response for your application?

• Will the device be used in a rugged or harsh environment?

• How important is portability?

• How important is ease of use?

• Do you want readings on radiation levels?

• Do you want to track exposure over time?

Bobby Sheikhan is director of product management for RAE Systems, Inc. He is experienced in providing training in air-monitoring and emergency-response planning for a wide range of industries.

Invisible dangers: Meat and poultry: a legacy of risks