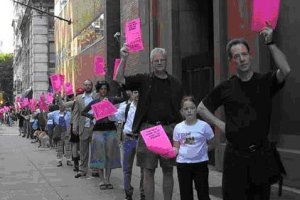 What is being billed as the world's largest unemployment line will form this morning along Broadway in New York City, "from the bull on Wall Street to Union Square," according to its organizers of the symbolic event.

An estimated 5,000 people are expected to join in the protest.

From a statement issued by the New York Committee for Occupational Safety & Health: "We will hold pink slips above our heads for 14 minutes in solidarity with the 14 million currently unemployed. The action will be a stunning visual evocation of the need for policies that encourage job creation versus tax cuts for corporations and the wealthiest one percent."

More information is available at: theline2012.wordpress.com/