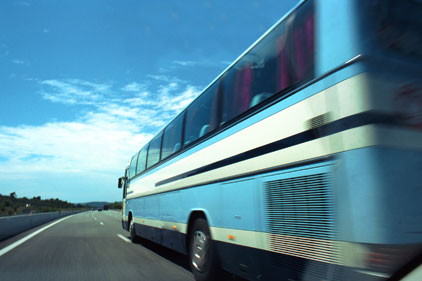 A severely fatigued motorcoach driver who lost control of the vehicle was the cause of a horrific crash in New York City last March, according to the National Transportation Safety Board (NTSB).

The early morning crash on March 12, 2011, involved a motorcoach operated by World Wide Travel of Greater New York that was taking 32 passengers from a Connecticut casino to New York City. The vehicle left the roadway, struck a guardrail and overturned onto its right side before colliding with a vertical highway signpost, which tore the roof panel from the vehicle body for almost the entire length of the motorcoach.

“This crash, one of three fatal U.S. bus crashes in rapid succession last year, is one of the deadliest bus accidents the NTSB has ever investigated,” said NTSB Chairman Deborah A. P. Hersman.

An examination of the driver’s work schedule, sleep times and cell phone use, revealed that his opportunity for sleep in the 72 hours prior to the crash would have been limited to short periods of three hours or less resulting in what the NTSB described as “acute sleep loss and cumulative sleep debt.”

Citing speed as a factor in the crash, the NTSB determined that the motorcoach, which had reached speeds as high as 78 mph in the 60 seconds prior to the crash, was traveling at least 64 mph in the 50 mph speed zone for at least 10 seconds before it struck the guardrail. Using a computer simulation, investigators found that had the motorcoach been traveling at the speed limit of 50 mph, it might not have overturned and the driver may have been able to steer away from the guardrail.

“Fatigue and speed are an especially lethal combination,” said Hersman. “Unfortunately, in investigation after investigation, we are seeing the tragic results of fatigue, which can degrade every aspect of human performance."

The motorcoach operator was cited as contributing to the accident because of its lax safety oversight of the driver, which stemmed from what the NTSB called “a corporate culture that fostered indifference to passenger safety.” Shortly after the crash, World Wide Travel was placed out of service by the Federal Motor Carrier Safety Administration and most of the officials, supervisory personnel and dispatchers continued to work for its sister company, Great Escapes, which is currently operating.

A synopsis of the NTSB report, including the probable cause, findings, and a complete list of the safety recommendations, is available at go.usa.gov/dIZ.

Two broadcast-quality animations that the NTSB created for its investigation into the accident are available at RELATED INFORMATION: www.go.usa.gov/dIZ