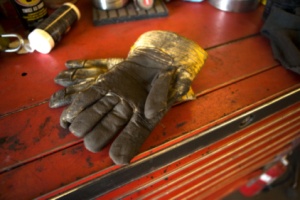 The need for safety equipment when performing hazardous tasks is undisputed, yet U.S. workers continue to take risks by failing to wear personal protective equipment (PPE) when it is needed.

In a Kimberly-Clark Professional survey released today, 82 percent of safety professionals said they had observed workers in their organizations failing to wear required PPE during the past year. Respondents also cited compliance as the top workplace safety issue in their facilities—further underscoring the significance of these findings.

"High levels of noncompliance have been an issue since we began conducting these surveys in 2007," said David Matela, Director, Safety Product Management, Kimberly-Clark Professional. "Even though it is mandated by OSHA, the vast majority of workers who have experienced on-the-job injuries were not wearing PPE. Increased compliance is crucial to creating Exceptional Workplaces that are healthy, safe and productive."

Given the importance of safety equipment in protecting employees, why does workplace compliance continue to be an issue? More than half of the safety professionals surveyed attributed noncompliance to workers thinking that safety equipment was not needed.

"With increased regulations and heightened awareness, it's disturbing and hard to believe that workers are unaware of the need to protect themselves," Matela said.

The other reasons for noncompliance cited by respondents were:

What can be done to improve compliance with PPE protocols? Sixty-one percent of respondents said they planned to improve existing education and training programs in the next six to 12 months, an effort that appears to be making a difference for respondents—both in terms of reducing injuries and boosting productivity.

Not only did 85 percent of respondents have company-sponsored safety programs already in place, 69 percent said the programs had helped reduce reportable incidence rates. Of these respondents, 58 percent said incidents had decreased "by half" or "more than half" since the implementation of a safety program. In addition, 80 percent of all respondents said they believed that instituting or increasing safety practices would increase their organization's overall productivity.

Safety professionals were also asked about hidden hazards that are not necessarily addressed by PPE, such as the potential health and safety risks posed by laundered shop towels. Ninety-three percent of respondents said they knew that metals retained on clean, laundered shop towels could get onto hands, then be inadvertently transferred to the mouth and swallowed. The same percentage said they would be concerned about potential health and safety issues for their workers if heavy metal residues or other toxic elements were found in their laundered shop towels in levels that exceeded regulatory health-based exposure limits.

In addition, 64 percent said they understood that even if they did not use heavy metals, such as lead or cadmium, in their manufacturing processes, that these metals could make their way into their operations via laundered shop towels that had been washed with those from other companies.

"Clearly, safety professionals are not only aware of the environmental issues posed by laundered shop towels, but also concerned about the potential health risks to workers," said Garrett Jaenicke, Marketing Manager, Manufacturing, Kimberly-Clark Professional. "Workers should refrain from using laundered shop towels to wipe sweat from their faces or as napkins at lunch. To eliminate the risk, workers and safety professionals should simply switch to clean, disposable wipers."