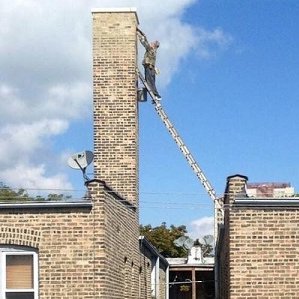 After three months of picture submissions and voting, the Ladder Association’s Idiots on Ladders campaign has discovered the biggest “ladder idiot” in the UK.

For the competition, which aimed to shame dangerous ladder users into changing their ways, the association accepted submissions from the public of the worst uses of ladders they could find. People then got to vote on Facebook on which picture was the best…of the worst.

The clear winner, with more than 30% of the vote, shows a worker reaching up to the top of a chimney with a gaping fall directly below him. He also has a bucket wedged between the ladder and the wall it was resting against.

“Not only could the fall have killed him, but one commenter pointed out that his ladder still did not reach high enough to keep him from stretching upwards,” according to the association.

The Ladder Association says it is looking into the background of the picture in an attempt to identify the man and offer him the training he obviously needs, “assuming he has survived to benefit from it.”

In second place: a gardener with one foot on the rung of his ladder and the other on a tree branch, while he brandished a chainsaw at the tree’s other branches without protective clothing or a harness. The picture originally came from a news story in the Lincolnshire Echo, which reported that he was fined a total of £6,000 for his ladder idiocy. The photo only won around 14% of the vote but took off on Facebook as it was shared and commented on by even more people than the winner.

“Ladders are arguably the most common type of equipment used for work at height – it is estimated that three million are in use in the UK alone,” said Cameron Clow, Chairman of the Ladder Association. “Reported ladder accidents have fallen by over 30% over the last 10 years, but more clearly needs to be done. While it is already known that falls from height are the number one cause of death at work, the number and variety of the pictures are startling evidence that dangerous ladder use is occurring daily.”

In conjunction with the competition, the association ran a Ladder Exchange, which allowed people and businesses to trade in unsafe ladders for new, compliant ones.

With the competition now over, the completed Idiots on Ladders album can be found on the Ladder Association Facebook page at facebook.com/ladderassociation.

The Ladder Association is the trade body responsible for advancing safety and best practice in the UK’s ladder industry, and oversees the delivery of national training.