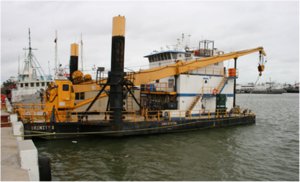 The National Transportation Safety Board (NTSB) has determined that the probable cause of the 2011 accident in the southern Gulf of Mexico that claimed four lives was the failure of Trinity Liftboats (the vessel owner/operator) and Geokinetics (the chartering organization) to adequately plan and prepare for a rapidly and locally developing hurricane. Contributing to the fatalities and injuries was the failure of the Trinity II crewmembers to make effective use of the vessel’s lifesaving equipment, resulting in their prolonged exposure to the elements while awaiting rescue.

On September 8, 2011, the 78.5-foot-long liftboat Trinity II, while elevated about 15 miles offshore in the Bay of Campeche, sustained damage to its stern jacking leg from severe weather associated with Hurricane Nate. When the stern jacking leg failed, causing the vessel to list, the four crewmembers and six contractors on board abandoned ship. All 10 persons, wearing lifejackets, entered the water where they clung to one of the vessel’s 12-person lifefloats. Three days passed until search and rescuers located nine of the personnel. Two of them were dead and a third would die later at the hospital. Four days after finding the nine personnel, responders recovered the body of the 10th person. The six survivors sustained serious injuries from days in open sea without out-of-water protection or supplies.

“Addressing and mitigating risks in transportation is why there are certification standards for equipment, training and licensing,” said NTSB Chairman Deborah A. P. Hersman. “Emergency preparedness and planning are just as essential for when safeguards fail or for when nature intervenes like it did so dramatically in this case.”

The NTSB investigation revealed that Trinity Liftboats’ and Geokinetics’ hurricane plans did not account for the risk posed by locally forming weather systems. This reduced the crewmembers’ ability to properly prepare in advance and to make an early decision to leave the vessel through routine means before the onset of the storm.

The NTSB noted that the vessel had recently been equipped with two new inflatable throw-over-type liferafts. Each liferaft was capable of holding up to 25 persons and contained drinking water, nonperishable food and thermal protection sheets, among other supplies. However, as the crew prepared to abandon ship, the two liferafts were inflated on deck instead of in the water, as directed. This led to both liferafts blowing away and vanishing in the high seas. In addition, no one on board the vessel brought the emergency position indicating radio beacon or EPIRP with them when they abandoned the ship. The EPIRP would have allowed rescuers to narrow the search area and reduced the search time significantly.

“As every mariner knows, the sea is powerful and unforgiving. This loss of life and the brutal experience for everyone involved underscores the importance of learning from this event. It’s essential to take the lessons learned and apply them to prevent future tragedies,” said Hersman.

As a result of the investigation, the NTSB issued safety recommendations to the United States Coast Guard, the U.S. Department of State, Trinity Liftboats, Geokinetics and the Offshore Marine Service Association. The safety recommendations address weather preparedness, use of lifesaving equipment and the need for improved investigative cooperation between the governments of Mexico and the United States, as it relates to marine accidents. The NTSB is also issuing a safety alert to mariners to address several aspects of survival.

A synopsis of the NTSB report, including the probable cause, findings and a complete list of the safety recommendations is available at www.ntsb.gov/news/events/2013/trinity_II/index.html.  The full report will be available on the website in a few weeks.