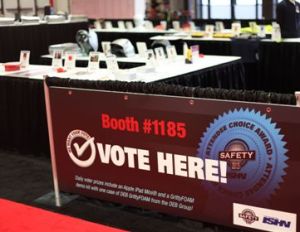 Many of the thousands of attendees at Safety 2013 are making their way to ISHN booth 1185 in the Las Vegas Convention Center to vote in the Safety 2013 Attendee Choice Awards for the most innovative EHS products and services. More than 70 of the product entries are actually on display in the expanded ISHN awards entry booth so voters can examine the entries before making their selections.

This is the first-ever such collaboration between ISHN magazine and the American Society of Safety Engineers (ASSE), which is sponsoring Safety 2013.

All registered attendees of ASSE Safety 2013 are eligible to vote on site. Voting will be open during exposition hours – but it ends Wednesday at 10 a.m. Voters have a chance to win an iPad mini and a GrittyFOAM demo kit with one case of GrittyFOAM.

The winners will be announced later in the day on Wednesday.