How the shutdown affected the NTSB

"Safety was not served" 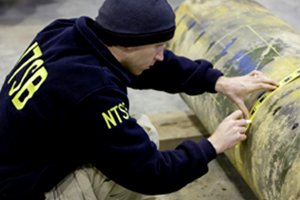 The federal government shutdown may be over, but if an announcement from the National Transportation Safety Board (NTSB) is any indication, federal agencies and employees are not over it.

The NTSB released a list of postponements, delays and changes caused by the 16-day stalemate, which forced the furlough of 383 of 405 of its employees.

"It is clear that safety was not served by the government shutdown," said NTSB Chairman Deborah A.P. Hersman.

Since reopening last Thursday, the Board has evaluated the impact that the shutdown had on current accident investigations and the agency’s ability to launch investigators to the dozens of accidents that occurred during the furlough period.

The impacts on major NTSB investigations include:

• Metro-North Derailment and Track Worker Fatality: A two-day investigative hearing on the May 17, 2013, derailment and collision involving two Metro-North commuter trains in Bridgeport, Conn., and the May 28, 2013, accident in West Haven, Conn., in which a rail worker was struck and killed by a Metro-North passenger train, was canceled during the shutdown. The hearing has been rescheduled for November 6 & 7.

• Asiana Airlines Crash During Landing: A two-day investigative hearing on the crash of Asiana Airlines Flight 214 at San Francisco International Airport has been postponed from November to December.

• Sissonville, West Virginia, Pipeline Rupture: The final report on the December 11, 2012, natural gas pipeline rupture and explosion has been delayed. The Board Members will consider the draft report before the end of the calendar year, but it will not be deliberated on December 3 at the previously scheduled Board Meeting.

• Boeing 787 Battery Fire: Additional testing of an exemplar lithium ion battery that was scheduled to begin during the shutdown had to be delayed.

During the shutdown, there were 59 new aviation accidents, of which ten were fatal crashes. In addition, there was a deadly motorcoach crash, a significant pipeline leak, a house explosion caused by a natural gas leak, a fatal grade crossing accident and a fatal transit accident. The agency launched investigators to only two of those accidents where it was determined that there was an imminent threat to life or property.

Some investigations will be limited

The NTSB will determine the probable cause of each of the 59 aviation accidents, but some investigations will be limited in scope.

While the NTSB will not initiate an investigation into the other accidents listed above, investigators will review reports and findings from state and local investigators to determine if there are any additional safety concerns that the NTSB should address.

"I am pleased to say that the dedicated men and women of the NTSB are back at work, focusing on our important safety mission," said Hersberg.

How Industry 4.0 can improve the shutdown process and plant maintenance

Is the shutdown affecting the safety of air travel?

By the numbers: OSHA activity during the shutdown

Has your safety training budget been affected by the bad economy? (10/27)