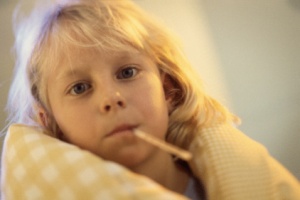 Five decades after the approval of an extremely effective vaccine against measles -- one of the world’s most contagious diseases -- the virus still poses a threat to domestic and global health security.

In an article published on December 5 by JAMA Pediatrics, Mark J. Papania, M.D., M.P.H. and colleagues from the Centers for Disease Control and Prevention (CDC) report that United States measles elimination, announced in 2000, has been sustained through 2011.

The article warns, however, that international importation continues, and that American doctors should suspect measles in children with high fever and rash, “especially when associated with international travel or international visitors,” and should report suspected cases to the local health department. Before the U.S. vaccination program started in 1963, measles was a year-round threat in this country. Nearly every child became infected; each year 450 to 500 people died each year, 48,000 were hospitalized, 7,000 had seizures, and about 1,000 suffered permanent brain damage or deafness.

People infected abroad continue to spark outbreaks among pockets of unvaccinated people, including infants and young children. It is still a serious illness: 1 in 5 children with measles is hospitalized. Usually there are about 60 cases per year, but 2013 saw a spike in American communities – some 175 cases and counting – virtually all linked to people who brought the infection home after foreign travel.

“A measles outbreak anywhere is a risk everywhere,” said CDC Director Tom Frieden, M.D., M.P.H. “The steady arrival of measles in the United States is a constant reminder that deadly diseases are testing our health security every day. Someday, it won’t be only measles at the international arrival gate; so, detecting diseases before they arrive is a wise investment in U.S. health security.

Eliminating measles worldwide has benefits beyond the lives saved each year. Actions taken to stop measles can also help us stop other diseases in their tracks. The CDC and its partners are building a global health security infrastructure that can be scaled up to deal with multiple emerging health threats.

Currently, only 1 in 5 countries can rapidly detect, respond to, or prevent global health threats caused by emerging infections. Improvements overseas, such as strengthening surveillance and lab systems, training disease detectives, and building facilities to investigate disease outbreaks make the world -- and the United States -- more secure.

“With patterns of global travel and trade, disease can spread nearly anywhere within 24 hours,” Dr. Frieden said. “That’s why the ability to detect, fight, and prevent these diseases must be developed and strengthened overseas, and not just here in the United States.”