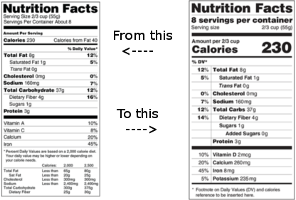 Would having the calories-per-serving in VERY LARGE numbers influence your decision to purchase – or not purchase – a food item?

You’ll get the chance to find out, if the FDA’s bid to revise the Nutrition Facts labels found on packaged foods is successful.

The agency said the proposed changes “reflect the latest scientific information, including the link between diet and chronic diseases such as obesity and heart disease. The proposed label also would replace out-of-date serving sizes to better align with how much people really eat, and it would feature a fresh design to highlight key parts of the label such as calories and serving sizes.”

FDA Commissioner Margaret A. Hamburg, M.D. said the labels have provided helpful information to consumers for 20 years, but needed to incorporate the latest in nutrition science in order to remain relevant, “as more has been learned about the connection between what we eat and the development of serious chronic diseases impacting millions of Americans.”

The label has not changed significantly since 2006 when information on trans fat had to be declared on the label, prompting manufacturers to reduce partially hydrogenated oils, the main source of trans fat, in many of their products.

“Our guiding principle here is very simple: that you as a parent and a consumer should be able to walk into your local grocery store, pick up an item off the shelf, and be able to tell whether it’s good for your family,” said First Lady Michelle Obama.

Some of the changes to the label the FDA proposed today would:

The proposed updates reflect new dietary recommendations, consensus reports, and national survey data, such as the 2010 Dietary Guidelines for Americans, nutrient intake recommendations from the Institute of Medicine, and intake data from the National Health and Nutrition Examination Survey (NHANES). The FDA also considered extensive input and comments from a wide range of stakeholders.

The changes proposed today affect all packaged foods except certain meat, poultry and processed egg products, which are regulated by the U.S. Department of Agriculture’s Food Safety and Inspection Service.

Too much sugar and salt

“Americans have too much added sugar in their diets, and making them more aware of the total amounts of added sugars is a huge step forward,” said Nancy Brown, CEO of the American Heart Association (AHA), who added that changing the Reference Amounts Customarily Consumed (RACCs) in 17 food categories “will help people better understand how many calories they actually consume, especially if they plan to eat all the food in a container or package.”

The AHA also cheered the FDA’s decision to lower the Daily Value for Sodium to 2300 mg -- the amount recommended in the current Dietary Guidelines for Americans – but wants the amount even lower.

“There is strong scientific evidence that indicates lowering sodium can result in significant reductions in blood pressure. Consequently, the association will continue to recommend sodium intake to be limited to 1,500 milligrams a day. We intend to work with the FDA, during this 90-day comment period and beyond if need be, to highlight the increased benefits from further sodium reductions, and to advocate for stronger action.”

The FDA is accepting public comment on the proposed changes for 90 days.