Consumer advisory: Motorists should 'Share the Road' with motorcyclists 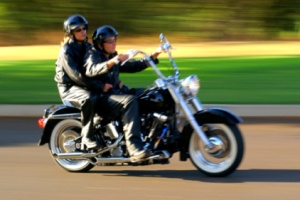 To kick off Motorcycle Safety Awareness Month, the U.S. Department of Transportation's National Highway Traffic Safety Administration (NHTSA) is reminding all drivers of cars, trucks and buses to look out for, and share the road with, motorcycle riders. A motorcyclist has the same rights, privileges, and responsibilities as any other motorist on the roadway.

“Motorcyclists will be out in force as the weather gets warmer, which is why May is the perfect month for Motorcycle Safety Awareness,” said U.S. Transportation Secretary Anthony Foxx. “Fatal crashes with motorcycles are on the rise. We all need to be more aware of motorcyclists in order to save lives and make sure we all ‘Share the Road’. ”

Motorcycle fatalities are up

NHTSA statistics show an increase in motorcycle fatalities in recent years: in 2012, 4,927 motorcyclists were killed in traffic crashes, a continued increase from 2011 (4,630). Those deaths accounted for 15 percent of the total highway fatalities that year, despite motorcycle registrations representing only 3 percent of all vehicles in the United States in 2012. Injured motorcyclists also increased from 81,000 in 2011 to 93,000 in 2012. On a per vehicle mile basis, motorcyclists are more than 26 times more likely to die in a crash than occupants of cars, and five times more likely to be injured.

Helmet usage is also on the decline, dropping from 66 percent of motorcyclists wearing helmets in 2011 to only 60 percent in 2012. Head injury is the leading cause of death in motorcycle crashes. NHTSA estimates that 1,699 lives were saved in 2012 because of proper helmet usage, but another 781lives could have been saved if helmets had been worn. Nineteen states, the District of Columbia, the Northern Mariana Islands, Puerto Rico and the U.S. Virgin Islands have a universal helmet law, requiring helmets for all riders.

“Wearing a helmet on every ride is an important way for a motorcyclist to stay safe, but we all play a part. It’s up to all motorists and motorcyclists to make our roads safer,” said NHTSA Acting Administrator David Friedman. “All road users need to share the responsibility of keeping the roadways safe. By following road signs, obeying speed limits, and always staying focused on the road, deaths could be prevented.”

Alcohol continues to be a factor in motorcycle fatalities. The percentage of motorcycle riders who were intoxicated in fatal crashes (27 percent) was greater than the percentage of intoxicated drivers of passenger cars (23 percent) and light trucks (22 percent) in fatal crashes in 2012. Also 29 percent of all fatally injured motorcycle riders had BAC levels of .08 or higher. The problem is especially acute at night. Motorcycle riders killed in traffic crashes at night were over 3 times (3.2) more likely to have BAC levels of .08 or higher than those killed during the day.