How safety professionals can survive the shrinking middle class

By James E. Leemann Ph.D.
On April 30th, Dave Johnson published an ISHN blog post entitled,Can the safety and health profession survive the demise of the middle class?1  I was curious about the question and offered the following response.

Who is the middle class anyway? 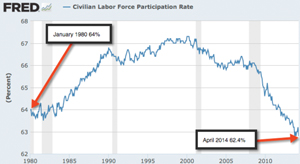 For me the middle class is that group of people in America that expends the most physical and mental energy to actually accomplish “WORK.” In May we learned that the unemployment rate had dropped from 6.7% to 6.3%. That’s good, right?  The Wall Street Journal ran the optimistic headline Job Growth Gathers Strength.2  But noted were worrisome signs of “another exodus of workers from the labor force and persistently weak wages.”   A more meaningful number is the Civilian Labor-Force Participation Rate (LFPR). In May it fell to its three-decade low of 62.8%. In other words, 37.2% of the U.S. population that wants to work cannot find a job as revealed in this FRED chart.3

For middle class workers who are employed, most have not seen a reasonable raise or any raise in quite a few years.  Workers’ wages are stagnant with an average increase in wages of 1.9% compared to a year ago and have been stagnant since the so-called Great Recession. 4

So middle class workers are working just as hard as they did a year ago, if not harder, and are faced with their income today not being enough to maintain their lifestyle. Indeed, the middle class is being squeezed tighter and tighter each year and falling deeper and deeper into debt.

Pay attention to the LFPR and if it continues on its downward path, be prepared for some extraordinarily difficult times.

To Dave Johnson’s question, “Yes”— I see the middle class being squeezed to the point of wages not paying for goods and services, to loss of jobs, to dependency on the government, to eventual economic collapse. We may not see a full-blown depression, but it sure will feel like one.

Let’s say I’m only 50% correct on my prediction. Safety and health professionals will see less middle class workers in the labor force, which translates into less need for S&H pros. For S&H pros living and working in Blue States (liberal), pay attention to what is happening. Is manufacturing leaving your state? Is capital investment going elsewhere?  Take note of the flight of middle class workers to Red States (conservative).  “Where money talks, nobody walks.”  In the past decade 1,600,000 people moved out of New York.5 While I was living in Arizona, more than 1,000,000 millionaires left California for Arizona.

If you see this emigration from your state, you might want to seek employment in states where middle class workers are going (most of which, if not all, are Red States) if you want to remain a S&H professional.

Dave’s blog post inspired several individuals to react to his post. Here are my thoughts regarding their comments.

“From a business standpoint the only compelling reason for safety is the cost of injuries.”  Sure, managers, regardless of whether they came from within or from outside the enterprise, have empathy toward the injured employee, but “from a business standpoint” the manager has to scramble backfilling the lost productivity in order to meet quotas.

“There are a very large number of companies that do not base safety on ROI or other financial measures beyond it being the right thing to do.” Several years ago, I researched this claim for an ISHN column and frankly came up empty handed.  Honestly, it would be tough for a CEO to make this argument to a board of directors.

“I personally have always thought it is a mistake to press the safety and health agenda based principally on costs.”  I totally agreed with this statement up until about 14 years ago when I was consulting for a medium-sized company and realized my client’s language was financial, pure and simple. This client was a strong advocate for safety and health, but in the context of his ability to make money from his employees’ productivity so that he could pay his employees in order for them to enjoy the pleasures of their lifestyle off the job. For too long S&H pros have been living in an altruistic state thinking any S&H pro who promoted a safety and health agenda based principally on costs was some sort of pariah to the profession. Folks, we need to get over this ideology and start thinking like business people.

“Have no fear EHS managers, you have a good long future.  Just ensure your company makes safety equal to production and quality, where working safely is esteemed.”  I disagree with “equating” safety to production and quality. For too long, S&H pros have endeavored to create parity with operations, production, quality, etc.  Folks, this is NOT the path to demonstrating the value of safety.  No doubt, safety is an integral component of these aspects of business, but at the end of the day, safety does not produce products. Hopefully, we all will wake up to this fact and start discovering ways to improve the production of products versus arguing how important S&H is to the business.

1 Johnson, D. Can the safety and health profession survive the demise of the middle class? April 30, 2014. Retrieved at http://www.ishn.com/articles/98522-can-the-safety-and-health-profession-survive-the-demise-of-the-middle-class.