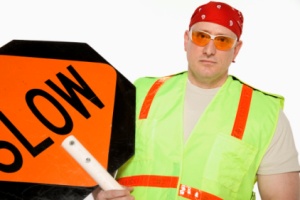 On Aug. 4, a Minnesota Department of Transportation (MnDOT) road painting crew was working on I-90 west of Highway 63 when a westbound car struck the second support vehicle serving as a protection barrier on the highway behind the westbound painting crew. Minor injuries were reported.

Then on Aug. 11, a car in a work zone on Highway 52 in south Rochester struck a passing truck. The collision forced the truck into the work zone where crews were at work, striking an unoccupied MnDOT vehicle. No injuries were reported.

“It all happens so fast,” said Larry Waletzki, the MnDOT bridge supervisor whose crew was in the work zone removing concrete from a bridge deck on Highway 52 when the Aug. 11 crash occurred. “We’re thankful there were no injuries, but we really hope people see the work zone and realize they need to slow down and pay attention.”

Although neither crash resulted in serious injuries, both the motorists’ vehicles and MnDOT vehicles sustained damage that resulted in lost time and repair costs.

The advice MnDOT is offering Minnesota motorists is useful for drivers across the nation who encounter work zones:
•     Stay alert
•     Watch for signs, equipment and workers
•     Minimize distractions, such as using cell phones, eating or drinking
•     Avoid tailgating
•     Follow posted speed limits and directional signs
•     Stay in one lane while driving through a work zone