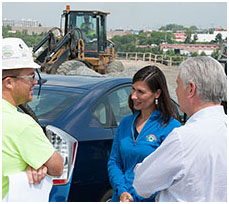 Hersman took note of the project’s focus on safety with an official partnership between Mascaro Construction Company and the Occupational Safety and Health Administration (OSHA) to deliver a safe construction project.

“Safety isn’t just about talking the talk, but walking the walk,” said Hersman. “Through their partnership, Mascaro, OSHA and Industrial Scientific are putting safety first on this construction site by investing in people, equipment and best practices.”

Groundbreaking for the new 200,000-square-foot building took place in September 2013 near Pittsburgh in Robinson Township. The facility is expected to be completed in 2015.