This website requires certain cookies to work and uses other cookies to help you have the best experience. By visiting this website, certain cookies have already been set, which you may delete and block. By closing this message or continuing to use our site, you agree to the use of cookies. Visit our updated privacy and cookie policy to learn more.
Home » Latino workers dying at higher rates in job accidents, report shows
Occupational SafetyToday's News
Fairwarning Reports:

Posted with permission from Fairwarning.org:

As Latino workers take on more and more of the nation’s toughest and dirtiest jobs, they increasingly are paying for it with their lives.

Preliminary federal figures released last week showed that of the 4,405 U.S. workers killed on the job in 2013, 797 were Latinos. That equates to 3.8 of every 100,000 full-time Latino employees in the U.S. dying in workplace accidents during the year.

Safety experts point to reluctance among many Latino workers, particularly immigrants, to protest job hazards. They commonly attribute the reluctance to language barriers or fears that complaining about working conditions will cost them their jobs or even lead to deportation.

In addition, worker advocates blame weak federal and state regulation and a trend of employers increasingly giving dangerous jobs to temporary workers, including some with little training.

Last year’s victims included Luis Rey Rivera Pavia, a 32-year-old machine helper for a Wire Mesh Sales LLC factory in Jacksonville, Fla., where most of the workers were Latino immigrants. Federal authorities said Rivera was killed in August when he tried to retrieve a metal bar that fell into a wire mesh manufacturing machine, and wound up being struck by a piece of the equipment.

While investigating the case, U.S. Occupational Safety and Health Administration inspectors discovered that two other workers previously suffered severe injuries on the same machinery. One worker had a limb amputated, and the other suffered a crushed forearm. David Michaels, OSHA’s chief, last week highlighted the Wire Mesh case when he outlined his agency’s adoption of new rules for reporting severe injuries, a change intended to help authorities better target their inspections.

He later added that immigrant workers “are vulnerable workers, and they often have the worst jobs.”

Another Latino worker killed on the job last year was Adan Sotelo Preciado, who died in September when he fell from the roof of a building at a construction site in Northville, S.D. He was helping build an addition to a warehouse when he stepped from the metal decking onto an unsupported patch of insulation, and plunged to the concrete floor 20 feet below.

Preciado, who was working for a company named Sierra Steel Buildings Inc., found the job through an ad on the Craigslist website. He received no training and wasn’t given a safety harness to guard against the risk of falls.

An OSHA report on accident said the employer “was fully aware of the hazards associated with steel erection.” Yet even after a company supervisor was notified of a near accident involving a worker who stepped through the insulation, “no corrective action was taken.”

In most workplace fatality cases, regardless of the race or ethnicity of the employees killed, regulatory penalties are light — a factor often noted by safety advocates. While OSHA has proposed unusually high fines of $697,700 from Wire Mesh, it imposed only $19,200 in penalties against Sierra Steel after citing the company for one willful and two serious violations, along with a lesser violation.

Likewise, OSHA proposed only $14,000 in penalties against Monarch Tower Inc. of Sarasota, Fla., after citing the company for two serious violations following the deaths of two cell tower workers. The employees plunged more than 200 feet to their deaths in a July 2013 accident near Belden, N.D.

Linda McCardle of Homerville, Ga., the mother of one of the victims, 25-year-old Zach Roberts, said the accident was devastating to her family. Her husband, Matthew McCardle, was working on the same tower, and witnessed his stepson’s fall. Shaken by the tragedy, Matthew McCardle only recently returned to work.

“He couldn’t deal with it,” Linda McCardle said of her husband. “He couldn’t go back to work, or talk to anybody about it.”

Linda McCardle remains uncertain about why her son’s safety harness failed. She said her son, who was married and the father of four children, “loved his job, and he was smart at it, real smart, and safety conscious.”

The preliminary job fatality figures, overall, were roughly in line with the annual totals for more than five years running. The preliminary figure of 4,405 reported last week for 2013 was up slightly from the 2012 preliminary figure of 4,383. But, every year as new reports of fatal job accidents trickle in, the numbers are revised upward. For 2012, the final figure rose by 245, to 4,628, by the time the final numbers were released in April. Even those so-called final numbers, however, are an undercount, because they exclude deaths from illnesses linked to the workplace, such as cancers associated with exposure to toxic chemicals.

The breakdown of the deaths by category also resembled the pattern of previous years. Transportation accounted for 40 percent of the deaths, followed by violence, including homicides, at 17 percent. Next came falls, slips and trips, at 16 percent, and contact with objects and equipment, also at 16 percent.

“There hasn’t been much change, which means that we’re not making the kind of progress that we need and, for some groups, things have gotten more hazardous,” said Peg Seminario, safety and health director for the AFL-CIO labor federation.

Myron Levin contributed to this story. 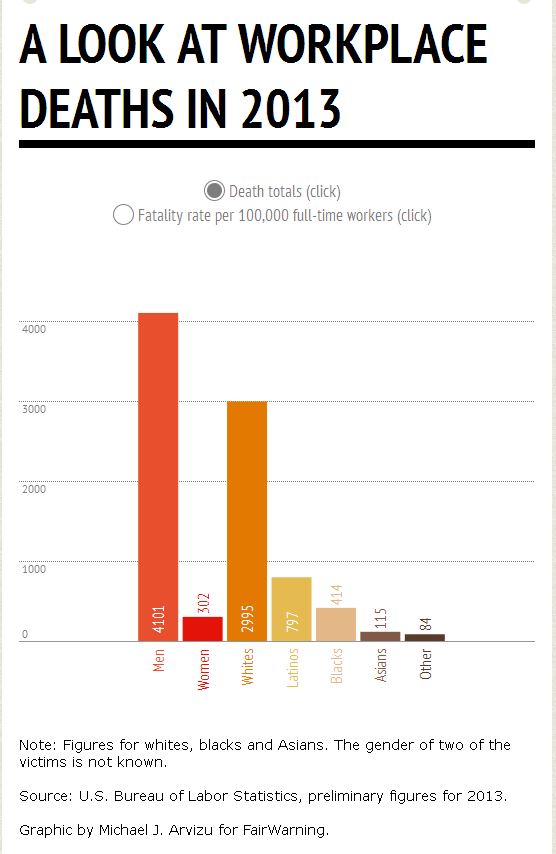 With rise in chemotherapy for pets, higher risks for veterinary staff

FairWarning Assistant Editor Stuart Silverstein is a veteran reporter and editor who worked on the business, metro and national news staffs of the Los Angeles Times. He covered, among other beats, organized labor, economics and higher education. During his 32-year newspaper career, Stu also worked for dailies in Dallas, Atlanta and Buffalo. Stu has taught business journalism at USC. When he isn’t chasing stories, Stu enjoys seeing foreign films, studying foreign languages, working out and swimming. And he is interested in anything having to do with his hometown, Buffalo, N.Y.

With rise in chemotherapy for pets, higher risks for veterinary staff

When can industrial workers get the COVID-19 vaccine?