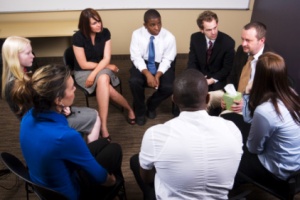 One by one they disappeared into the dark house. All curtains and blinds were drawn. The house looked like a bulky shadow in the night. They were careful to time their arrivals. No clustering or crowds that would attract attention. Every few minutes another figure would knock and enter silently. Many wore hoodies, scarves and hats so their faces were concealed. They seemed nervous, edgy, walking to the house, looking around as though someone might be following them.

Inside, down in the basement, a circle of folding chairs was set up around a small table with white candles lit on it. Kind of like a church meeting.

The candlelight revealed the visitors to be adults of all ages. All appeared to be on their way home from work. There were a few secretaries. A car mechanic. Couple of warehouse guys. Then there were men in suits, executive looking. And women in smart pants suits. There was even a cop and a fireman. A teacher. Maybe two. And a nurse and a physician.

“OK,” said the hostess, a pleasant looking woman in her 50s. She looked like she had just come from work. “Everyone feel safe? No one followed you, right? That’s why we change the meeting address every week. Hard to find a moving target, you know.”

Everyone took their seats, settling into their chairs. Some had water bottles. Others brought coffee.

“Did everyone have a chance this week to read the material?” asked the hostess. Turns out hosts and hostesses rotate with every new meeting place.

“So… let’s hear it. What do you think of this report, ‘Sick on the job? Myths and Realities about Mental Health at Work’?”

There is uncomfortable silence. No one seems to want to break the ice. Numerous faces stare at the tile floor.

“Well,” one man finally spoke up. “This Organisation for Economic Co-operation and Development, that wrote the report, is based in Paris. I don’t take comfort in that. The Europeans have always been far ahead of the U.S. when it comes to facing up to mental health issues. I don’t think this report, important as it is, will have any impact whatsoever on U.S. businesses.”

“There is a lot of truth in the report,” said a woman. “One in five workers suffer from a mental illness, such as depression or anxiety, and many are struggling to cope. We can all relate. It is a struggle.”

“And it’s definitely true,” said a young man, “most people with mental health disorders do work. It’s not like we’re trying to be lazy.”

“When I’m anxious or depressed, sure, my productivity goes down,” said the mechanic. “I try to hide it best I can.”

“Sometimes I can’t get out of bed in the morning,” said one of the men in suits and ties. “I hate it, but I call in sick. That report is right, workers with mental health disorders are of course more likely to have more absences.”

“It just so tough to file a disability claim for anxiety or depression or burn out,” said one of the secretaries. “I tried it once years ago and got rejected. Even with my physician’s notes on my medical history. Insurance claimed that since I was not 100% incapacitated by my illness, that I could get up and get around and still do my job, I was not truly disabled.”

“The best I could do was get a month’s unpaid leave from my boss,” said a woman. “When I came back, he said, ‘Now I just want you to promise me this will never happen again.’ What could I say? He had me. As you all know, one of the real frustrations with depression and anxiety is it is unpredictable. You don’t know how you’re going to feel next week, or tomorrow. Some days I have energy, some days I’m really struggling. But I told my boss, “Yeah, this won’t happen again.” And I’m thinking to myself: It won’t happen on this job again because if it does, I’m out of here. They won’t put up with me.”

“That’s why I do everything I can to cover up my depression,” said one of the warehouse guys. “Once they find you out, they never look at you the same way. You are on permanent probation. They don’t trust you, no matter how many excellent performance reviews you’ve had. The stigma, I think it’s worse than being an alcoholic, a gambler, an adulterer. Those things are more out in the open. Hell, look at ‘Mad Men.’ All of that was OK in the office. Boys will be boys.

“But have a panic attack and have to hide in a bathroom stall, well, big boys don’t cry, you know,” said another man. When that has happened to me I wish I was a woman with a make-up kit.”

The tight circle of work-weary men and women laughed or smiled.

“I’ve used my company’s EAP,” said a woman. “They put me in touch with some good people. It helped. But you know, I do wonder about privacy. There just doesn’t seem to be privacy anywhere anymore. IT from HQ 600 miles away can get crawl all around my computer and emails. So I wonder. If I do use the EAP 800 number, you mean no one but no one in my company knows anything about it? I’m not sure about that firewall.”

“Well, it’s good to talk like this,” said the host. “At least here we can be ourselves, be out in the open. See and hear how others deal with working with mental health issues.

“You mean our stealth tactics,” said a young man.

“Our evasion tactics,” said another.

“You got to protect your livelihood,” said the cop. That report from France says people with a mental disorder are two to three times as likely to be unemployed as people with no disorders. I believe it, and I can’t afford to lose my job, not in this economy. So I go underground.”

“Or stay in the closet,” grinned another man.

“Well, our situation will never get better unless it’s discussed out in the open much, much more than it is today,” said a woman. “Most common mental disorders can get better, we all know that, and employment chances can be improved with the right treatment. But health systems just focus on treating people with severe disorders, like schizophrenia, who make up only one-fourth of sufferers. Employers need to know there are all different levels and degrees of mental health disorders. We’re not all bound for the asylum.”

The group got a chuckle out of that.