Made in America company launches retail.TyndaleUSA.com 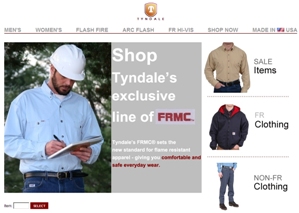 For more than thirty years, Tyndale has been helping companies manage employee protective apparel programs—while fulfilling a growing interest in supporting the nation’s economy by manufacturing clothing in America with American- made materials. A manufacturer and distributor whose product line has exclusively been available to large corporations, Tyndale announced its made-in-the USA product line is now available to individuals in need of FR clothing through Retail.TyndaleUSA.com.

“Retail.TyndaleUSA.com enables us to serve the many contractors and smaller companies who face arc and flash fire hazards in their everyday work but may not have a need for a full-service FR clothing program,” Tyndale CEO Gail Whittenberger explained. “We are proud to offer them a quality, American-made option for their protective apparel.”

With an unemployment rate hovering around 9 percent, a shrinking middle class, and an ever-growing national debt, it is more important than ever to keep jobs in America. As some companies are “re-shoring” to lower total costs and bring jobs back to the US, Tyndale has made its products in America from the beginning.

Dale Whittenberger founded Tyndale in 1981 to provide clothing services to companies beyond simply supplying them with uniforms. As a result of increasingly stringent federal regulations mandating protective apparel, Tyndale began specializing in providing flame resistant clothing and sought to alleviate the burden of compliance for customers by managing compliance for them. This service-based model has today earned Tyndale the opportunity to serve more than 20 Fortune 500 companies and half of electric utilities.

Gail Whittenberger took the helm at Tyndale in 2007—also earning the company recognition as a woman-owned business. The company has grown rapidly since—in spite of the economic climate, and was identified this year as one of the 50 fastest-growing woman-owned businesses by the Women Presidents’ Organization.

Although it distributes some imported products from other suppliers, Tyndale emphasizes American manufacturing in its sourcing and its own line of American-made products makes up over half of its business. Whittenberger said that these made-in-the USA products have largely contributed to the company’s success.

“It feels good to do our part to keep jobs in the US,” Whittenberger said, “and our customers appreciate the opportunity to do the same.” Whittenberger said American-made products also translate into tighter quality control and shorter lead times.

“By opening our business to the public with Retail.TyndaleUSA.com, we hope to continue growing our own all-American workforce,” she said.