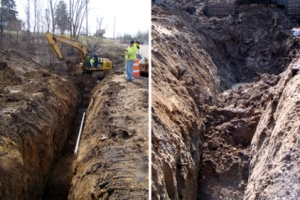 In a story first reported on www.ishn.com on May 4, Gordy's Pump Service of River Falls, Wisconsin was cited for  five safety – including two willful – violations as the result of an inspection conducted after a 19-year-old worker died when an unprotected trench collapsed at a Spring Valley job site on Nov. 3, 2011. The teenager had just finished locating an existing waterline in the 220 feet long, 6 feet deep and 2 feet wide trench using a hand-held shovel when a sidewall caved in. Proposed fines total $137,000. Due to the willful violations, OSHA has placed Gordy's Pump Service in its Severe Violator Enforcement Program, which focuses on recalcitrant employers and mandates targeted follow-up inspections to ensure compliance with the law.

In Rhode Island, OSHA has proposed fines totaling $117,740 against Newport-based Raymond J. Cawley Contracting Inc. for allowing cave-in and other hazards while workers were excavating at 28 W. Main Road in Middletown to replace a sewer line. OSHA’s inspection found workers in an unsafe 8-foot-deep trench who were working without means of safe egress, protective helmets, or adequate training.

OSHA has also cited Perrysburg, Ohio-based Stillion Brothers Excavation Inc. with five safety – including two willful – violations for failing to protect workers from trench cave-ins at a job site in Columbus Grove. OSHA initiated an inspection on Dec. 15, 2011, under the agency's National Emphasis Program on Trenching and Excavation. Six workers were installing 20-foot-long steel plates into a 12-foot-deep trench using a hydraulic excavator with a swivel hook that was not equipped with a safety latch. Proposed penalties total $72,820.

Detailed information on trenching and excavation hazards and related OSHA standards is available on OSHA's Trenching and Excavation page.