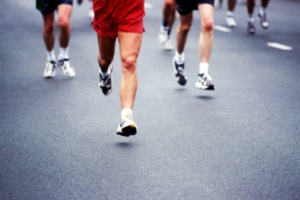 Even though hundreds of thousands more people finished grueling 26.2 mile marathons in the United States in 2009 compared to a decade earlier, a runner’s risk of dying during or soon after the race has remained very low — about .75 per 100,000, new Johns Hopkins research suggests. Men, however, were twice as likely to die as women.

“It’s very dramatic when someone dies on the course, but it’s not common,” says Julius Cuong Pham, M.D., Ph.D., an associate professor of emergency medicine and anesthesiology and critical care medicine at the Johns Hopkins University School of Medicine, and leader of the study published online in The American Journal of Sports Medicine. “There are clearly many health benefits associated with running. It doesn’t make you immune, but your risk of dying from running a marathon is very, very low.”

Pham and his colleagues found that between 2000 and 2009, 28 people died during or in the 24 hours following, a marathon, most of them men. Half of those who died were over age 45, and all but one in the over-45 group died of heart disease. For younger runners, the cause of death varied widely and included cardiac arrhythmia and hyponatremia, the latter owing to drinking excessive amounts of water.

Marathons have long been considered the pinnacle of endurance sports, but they have become wildly popular in recent years. Pham and colleagues looked at statistics from approximately 300 marathons per year and found that the number of finishers increased dramatically between 2000 and 2009, from 299,018 to 473,354. The researchers said they believe the recent increase in marathon popularity is partially because of increasing awareness of the health benefits gained from regular exercise.

Numerous studies have linked exercise to better physical and mental health, and to longevity, Pham says. Similarly, marathon running has been associated with decreased risks of hypertension, high cholesterol and diabetes. People who run regularly have been found to have lower rates of all-cause mortality and disability.

With so many more people participating, Pham says he expected to find that the pace of marathons would have slowed over time, but the average finishing time also stayed steady at roughly four hours and 35 minutes.

One limitation of the study, however, is that there is no easily available access to data on the number of people who drop out of the races without finishing, which may have artificially kept average finishing times higher.

Pham, a three-time marathoner himself, cautions that people should not think that marathon training or running is risk-free. He noted that studies have shown the yearly incidence of injury in people training for marathons to be as high as 90 percent, with the vast majority of injuries damaging the musculoskeletal system.