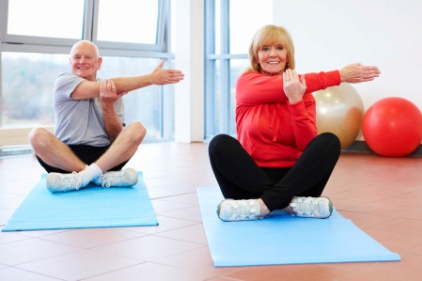 Group yoga can improve balance in stroke survivors who no longer receive rehabilitative care, according to new research in the American Heart Association journal Stroke.

In a small pilot study, researchers tested the potential benefits of yoga among chronic stroke survivors — those whose stroke occurred more than six months earlier.

“For people with chronic stroke, something like yoga in a group environment is cost effective and appears to improve motor function and balance,” said Arlene Schmid, Ph.D., O.T.R., lead researcher and a rehabilitation research scientist at Roudebush Veterans Administration-Medical Center and Indiana University, Department of Occupational Therapy in Indianapolis, Ind.

The study’s 47 participants, about three-quarters of them male veterans, were divided into three groups: twice-weekly group yoga for eight weeks; a “yoga-plus” group, which met twice weekly and had a relaxation recording to use at least three times a week; and a usual medical care group that did no rehabilitation.

Compared with patients in the usual-care group, those who completed yoga or yoga-plus significantly improved their balance.

Balance problems frequently last long after a person suffers a stroke, and are related to greater disability and a higher risk of falls, researchers said.

Furthermore, survivors in the yoga groups had improved scores for independence and quality of life and were less afraid of falling.

The oldest patient in the study was in his 90s.