They achieved the impossible

Resources companies in Western Australia have achieved what many have worked for but no one really believed would happen. In 2012 there were no fatal incidents in the industry.

The mining industry is a dangerous business, and while you aim for [zero fatalities] I never thought we would achieve it and I am absolutely over the moon that we have.

This is a very significant achievement ... [and] it is particularly pleasing when you consider that there are now more people than ever before working in the WA resources industry ... (DMP, 2013)

WA mining got its start in the 1890s when gold was discovered. Gold's significance diminished at the turn of the 20th century but mining, as an industry, expanded. Other products mined include copper, lead, zinc, diamonds, cobalt, coal, mineral sands and salt. Iron ore mining suffered a setback in 1938 when the Lyons government embargoed iron ore exports. Officially, this was brought about by doubts as to the adequacy of Australian iron ore resources for the domestic demand. Everyone knew that the real reason was to stop the ore getting to Japan. In 1960 the Menzies government lifted the embargo and the huge demand from Japan lifted iron mining to the pre-eminence it enjoys today.

Death on the Job

Mining is a dangerous job although not the most dangerous job. In 2010 mining in WA ranked seventh with 3.5 death per 100,000 workers. Driving is much worse — road freight transport had 22.5 in the same year! Still, the spectre is always there.

Fatalities have steadily dropped since a war-time peak but the drop showed signs of bottoming out in the past two decades. While there was still a steady reduction, in the last decade — as you can see from Figure 2— fatalities stubbornly stayed around four per annum. Even so, the reduction from fatal incidents numbered in the 30s was commendable. 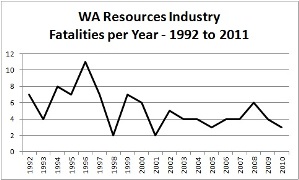 Enough of the back-slapping.

Our issue is, "How did the resources sector achieve a fatality-free year?" Inevitably, opinions vary according to point of view. Norman Moore said:

I have no doubt the safety reforms introduced by the department under the Reform and Development at Resources Safety (RADARS) strategy in 2010, have played an instrumental role in the achievement.

What is the vision of the RADARS strategy?

The Government’s vision for safety reform is a proactive safety regulator working with industry to create an environment in which ‘resilient’ safety cultures are the norm, and companies, workers and the wider community are confident that industry is operating as safely as possible.

For industry, the ultimate outcome will be a reduction in the number and severity of incidents, and another step towards the goal of ‘zero harm’.

There is no doubt that without pressure from the Department of Mines and Petroleum the intense and increasing attention to safety issues in the resources industry would not have developed. However, people at the coalface see little of the proactive safety regulator.

People at the cutting edge deal with their supervisors and their Safety Advisor (OSHA). These folk focus on two documents. Document names vary from company to company and even site to site, but we will call them "Take 5s" and "JSEAs" (Job Safety and Environment Analysis).

These are the pestilential paperwork which is the bane of the miner/construction worker's life. They are regularly misunderstood and their explanation/justification is a major part of an OSHA’s job. It is these documents that take the proactivity to the workplace.

On October 2, 2007, the Western Australian Parliament gazetted section 3.143 of the Occupational Safety and Health Regulations 1996. In doing so it introduced the concept of the Safe Work Method Statement (SWMS). It is interesting to note that the term JSEA was never mentioned in law, but the two documents are almost identical. (A generic SWMS template is available at http:\\www.rickduley.webs.com\Sample-SafeWorkMethodStatement.zip)

Differences are mainly related to where and how they are used. SWMSs are used in manufacturing where processes are identical each time they are employed. Same machine, same material, same process, same practice, same job. They become codified and can be filed and produced each time a particular production run is required.

In mining and construction, JSEAs dominate. This is a significant move away from "Safe Operating Procedures" (SOPs) which specify individual steps in a task, and how to take those steps "safely".

Workers were to focus on the SOP which was issued from the office. Looking at the hazards was not mentioned.

Each part of a project is unique so a new JSEA is required for each one.

Here's the big difference, JSEAs are written by the workers before they start on the new job. They are not created at an office desk. Supervisors and OSHAs assist, but it is the work team which should produce the document.

On some projects the OSHAs collect JSEAs at the end of night shift on Sunday, and the Monday dayshift crew have to build a new one from scratch. It is supposed to be a team effort. It is not acceptable to designate one of the crew to write the JSEA, or copy it from an old one, while the others get on with something useful. The object of the exercise is that workers focus on the hazards of this particular job, and the controls which can be implemented step-by-step throughout the task. Each JSEA (or SWMS) must:

Workers writing their own JSEAs eliminates the old "blood sheet" argument. The" blood sheet argument" is that the worker signs the form to indemnify the company in the event of accident or worse. Workers now own their JSEA. It is evidence that they have considered the hazards in their working environment at each step of the job, and the controls that are in place or that they will put in place before starting work. JSEAs show that the workers have done what they can, and responsibility for safety is firmly pushed up the chain.

Effectively, Take5s are micro JSEAs. They refer to each, individual person/task. They are filled out by the individual worker. They get their name from taking five minutes to consider what you are about to do. Once again, the object of the exercise is to get the individual worker to think about the hazards related to the new task, and to the controls which must be in place before starting. At the end of the shift they are handed to the OSHA for checking and filing. Knowing the job environment makes it easy to tell whether they are a genuine attempt to assess the hazards or if they are only done "... 'cos I hasta!"

OSHAs face another problem with Take5s. That is that they tend to get filled out when the workers see the OSHA approaching. Patience, a sense of humour and gentle clarification of the function of the form can cure this. OSHAs are wise to fill out their own Take5s before asking to see those of the workers.

They can be overdone. Pilbara legend tells of one company which would insist that a driver changing from a graded dirt bush road to a tar-seal road fill out a Take5 on the spot. It is said that workers could fill out 50 Take5s in a shift. Perhaps that is excessive. Perhaps it would lead to complaints about pestilential paperwork. In theory it is correct but OSH is always a compromise between what is perfect and what is reasonably practicable.

In the opinion of the author it is largely worker awareness of hazards and controls which has wrought the miraculous fatality-free year. This is a justification for those who have turned their backs on absolute reliance on training and supervision, and blind reliance on SOPs. These things have their place in the armoury of the OSH movement, but must be used alongside the empowerment of the workforce and their involvement in coalface OSH.

As to whether a repeat of this miraculous year can be expected soon — well, unfortunately, that is unlikely. Reconsider Figure 2and you will see that spikes and dips are common. We must consider this last year as a dip, and just try to repeat it. We now know it can be done.

It is interesting to note that, despite last year's WA resources result, Safe Work Australia (the national body) is calling for a 20% reduction in worker fatalities across all industries by 2022. (Australian Work Health and Safety Strategy 2012-2022(2012), p.7)

We may have won a battle but the war is still raging.

Duley is a free-lance Safety Advisor working in construction and mining in the Pilbara, Murchison, and Kimberley areas of Western Australia. He has been involved in OSH since its very foundation in Australasia first qualifying in New Zealand in 1983. CONTACT INFORMATION: Rick Duley  rickduley@gmail.com - http://rickduley.webs.com - aussie : 0409 106 049 - o'seas : +61 409 106 049 - skype  : rickduley