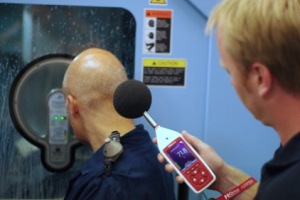 As one of the world’s top racing engine design and manufacturers, noise levels in the workplace have always been an issue for Ilmor Engineering.

But when they won a large contract with the US giant General Motors to design and manufacture a new turbo-charged V6 racing engine for the 2012 IndyCar championship, its managers knew immediately this would result in significantly increased production as well as noise levels across the manufacturing and testing departments.

At the time, the company’s existing noise management system split the factory into ‘Zones’ based upon the noise exposure levels. The main machine shop was mostly Zone 0 – or where noise levels are below action level 1 / 80dB(A).

The new contract meant additional machine tools had to be installed in the main machine shop adding to the noise background levels. These additions also speeded up the production rate but had the potential to ‘tip’ some of the machine operators working in Zone 0 or exposure above 80dB(A).

Nick Phillips, Ilmor Engineering’s Manufacturing Manager explained: “When employees are loading and unloading work into the machine, an air gun is used to blow the swarf and excess cutting fluid from the machine. This generates very high levels of noise, albeit of short duration, so hearing protection was used by our operators to control their levels of exposure to noise.”

To determine whether Ilmor Engineering workers were being exposed to noise levels above 80dB(A) a repeat occupational noise exposure survey was carried out using a Cirrus Research doseBadge.

“The doseBadge is a wireless personal noise dosemeter, ideal to be used to carry out noise measurements in occupational and industrial hygiene and so provide a unique solution to these applications,” added Nick.

By using a doseBadge, accurate measurements and recording of employees’ long term exposure to noise were tracked and analysed as that poses the greatest risk to an employees’ hearing and physical state.

The doseBadge can be set up to meet almost every occupational or industrial hygiene noise measurement standard, as well as EU Physical Agents Directive and the 2005 Control of Noise at Work Regulations (UK).

From the measurements taken during the workers’ shift at Ilmor Engineering, it was found that there were several points throughout the day where their noise exposure levels would greatly exceed that of 80dB(A), for example, at one point their noise exposure reached 110dB(A).

As an interim measure, Ilmor issued immediate instructions to those operators directly affected to wear their existing hearing protection for the complete shift, not just when loading and unloading work.

After analysing the graphical traces produced by the doseBadge, it was also suspected that the principle reason for the rise was due to the increase use of the air guns and associated high levels of noise they produce.

A more detailed investigation into the noise generated by air guns was undertaken using a Cirrus Optimus Red sound level meter which enabled measurements to be taken of the instantaneous peaks and at a range of different frequencies.

The Optimus Red was ideal for this manufacturing environment with a clear, high resolution OLED colour screen, a wide 120dB measurement span (up to 140dB(A) and 143dBc Peak and simultaneous measurement of all available parameters.

The results gathered from the Optimus sound level meter survey were relatively similar to those previously recorded but the main difference was the fact that there were significantly more occurrences of the air gun being used per shift and the noise was affecting nearby operators.

Due to the logarithmic nature of noise exposure, it only takes a few extremely high levels of relatively short bursts of sound, lasting for seconds not minutes, to make a significant impact on an operator’s overall daily exposure. For example, exposure to noise levels of 107dB would mean an operator would receive their daily dose in as little over 3 minutes. So, the increased exposure levels recorded by the doseBadge were directly caused by the increased rate of production and directly attributable to the increased use of air guns.

Thanks to the very detailed and accurate information provided by both the DoseBadge and Optimus Red sound level meter, Ilmor Engineering was able to investigate and modify its manufacturing processes, taking noise levels back down to previous levels.

Nick Phillips concludes: “Without the use of Cirrus Research’s noise measuring equipment, we wouldn’t have been able to find out the extent to the levels of noise our employees were being exposed to. The equipment was easy to set-up and use and, of course, gave the readings and results that we needed to manage the workforce’s noise exposure and to implement appropriate hearing protection. The Optimus Red and doseBadge, contributed to us fulfilling our responsibility towards the environment and employees, ensuring noise produced by our activities was minimised.”

Ilmor Engineering Ltd, based in Northampton, is one of the world’s top racing engine design and manufacturing companies, based in Northamptonshire. Formed in 1984 by Paul Morgan, Mario Illien and Roger Penske, their engines have won races and driver’s championships at the highest levels and in some of the most popular forms of motorsport such as Formula One, IndyCar and NASCAR.

As an industry leader, all of its products are manufactured in the UK and are used in a wide range of different applications within the construction, transport, aviation, manufacturing and leisure & sport sectors.

Cirrus is part of the British Safety Industry Federation’s Registered Safety Supplier Scheme, identifying its organisation and products as ‘genuine and safe’, assuring customers that the products supplied are genuine, properly tested and certificated. Cirrus Research is an ISO 9001:2008 and ISO 14001:2004 Registered Company.