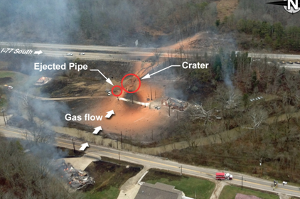 The 2012 rupture of a Columbia Gas Transmission Corporation natural gas pipeline in West Virginia was caused by external corrosion that could have been discovered by the pipeline operator, the National Transportation Safety Board (NTSB) said in a report released earlier this week.

On December 11, 2012, a 20-inch high-pressure natural gas pipeline running through Sissonville, W.V., ruptured with so much force that a 20-foot-long segment of pipe was thrown more than 40 feet from where it had been buried. The released natural gas ignited and burned so hot that it heavily damaged the asphalt road surface on an interstate highway, destroyed three homes, and melted the siding on houses hundreds of feet from the rupture site.

It took the pipeline controller more than 10 minutes to recognize that a rupture had occurred despite the series of alerts he was receiving that indicated that the pressure in the pipeline had begun to decay. The shutdown was only initiated after a controller from another pipeline company reported a possible rupture to the CGTC control center.

Following the rupture, more than an hour passed before the pipeline operator’s field personnel were able to shut down the supply of natural gas to the broken pipe. More than 76 million cubic feet of natural gas was released and burned, which exacerbated the property damage caused by the accident. The NTSB said that had the pipeline been equipped with automatic shutoff valves, they would have shortened the duration of the gas-fed fire.

A 30-square-foot area of the ruptured pipeline was found to have suffered from severe external corrosion that reduced the thickness of the pipeline wall to only about 30 percent of what the pipe originally had when it was installed in 1967.

The ruptured pipe was the smallest diameter of a group of three CGTC pipelines, all of similar age, which traversed the immediate area. The two larger pipelines were in a “high consequence area,” which required more stringent inspections. Both of those pipes were periodically examined with an inline inspection tool. The accident pipeline, however, had not been inspected or tested since 1988. The NTSB said that if it had been inspected with an inline tool, the rupture would likely have been prevented.

“Remarkably, no lives were lost in this accident but the potential for tragedy was clearly there,” said NTSB Chairman Deborah A.P. Hersman. “Inspection and testing improve the chances of locating defects early, and reduce the probability of a catastrophic failure which can have devastating results.”

As a result of this accident investigation, the NTSB issued three safety recommendations to the Columbia Gas Transmission Corporation and one to the Pipeline and Hazardous Materials Safety Administration.

The full 38-page accident report, including a one-page executive summary of investigation, is available at http://go.usa.gov/KDKx.