Safety & health pros come in all stripes and colors 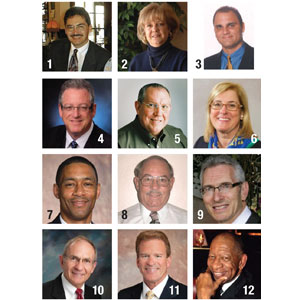 Sharon Burke from upstate New York – ambitious, determined, curious, adventurous, and a ski patrol rescue team member in her spare time. Those traits of hers are shared by many safety pros, especially doing volunteer work off-hours.

Charlie Hart passed on some years ago, but I’ll always remember his leading question to senior execs when he was new on a job: “Just tell me how much safety you want in this plant.” It saved Charlie a lot of frustration.

Steve Parella down in Tennessee eventually left the safety world to become a counselor. No stretch there.

Ernie Huelke is one of those unsinkable safety pros. He once took a sabbatical in a one-room flat in Paris for a year or so. Then he came back to the same employer he left, in a better job. Creative, adventurous, curious, a free spirit, a sharp safety mind.

Steve Damsker was (he recently retired) another unsinkable pro. Worked in the paper industry for years. Got very involved in behavior-based safety. Then relocated down south and finished his career working in loss control. Steve, like many a safety pro, was/is a no BS guy. Wasn’t afraid to rankle the brass – or just about anyone else.

Keith Tait – a Yale graduate, a brilliant industrial hygienist. Keith was a safety and health globetrotter before taking an early retirement from the corporate world. For years he spent more time in planes than he did on the ground. Very curious, open and friendly, very committed to upgrading industrial hygiene capacity in countries such as India. Now employed in hospice and palliative care work. Some pros like Keith make leaping career transitions.

Larry Curtis (8) – currently the executive director of the Institute for Safety and Health Management (ISHM). His traits, common among peers: a great sense of humor; doesn’t take himself too seriously; but takes his mission of educating professionals in the ways of management very seriously.

George Shirley from Sulphur, LA. The town’s name tells you what you need to know about George’s work. He’s retired now, living in the Houston area. Great people skills; could talk to anyone. Was ahead of his time in using the Internet . Back in the mid ’90s he told me: “I don’t spend a lot of time on the Internet. I get on, find what I need, and get off.”

Barb Wisniewski (2) — She became the safety and health manager for McWane, the Alabama manufacturer that was raked over the coals as few companies are publicly for its lousy safety record. With senior leadership’s support, she turned the company’s safety and health performance around, and it didn’t take ten years. Like many pros, Barb won’t risk failing because she doesn’t plan to.

Jerry Scannell – the former OSHA boss of the late ’80s and early ’90s. After OSHA went on to head the National Safety Council. Like many pros, a true gentleman, or gentlewoman. Down to earth unlike a politician. I had an interview scheduled in DC with Jerry the morning after a refinery blew sky high in Pasadena, Texas, killing more than 20 workers. Jerry didn’t quash the interview, though he had every reason to. He talked to me for an hour. His bags were packed in the hallway outside. Soon as we finished, he was on a plane to Texas.

Marv Broman worked for Valmont Industries in Nebraska. Marv, now retired, was intellectually curious and sharp. No way Marv would be confined to the “safety box.” Suggested that I would get a lot out of reading Malcolm Gladwell’s book, “The Tipping Point.” Marv had no time for the “herd thinking” that he believed held back the safety profession. Another no-nonsense gentleman.

Aaron Chen (1) – an industrial hygienist for DuPont whose interests stretch far beyond traditional industrial hygiene. His trait common with many peers – Aaron is always ready to contribute to the safety and health community. His perspectives on things are sharp as a tack. A caring, committed man.

Joanne Dean worked for a construction company in New Jersey and had the guts to rush out to try to save a worker who was being sucked underground by an auger. It was a grisly scene. Two other safety pros stayed behind, not wanting to take on the trauma. Courage is what Joanne shares with many safety pros.

Gene Earnest – launched industry’s first behavior-based safety program at Proctor & Gamble in the ’70s after researching the subject in non-safety literature. He never bragged about it. A humble, straight-shooting corporate safety guy.

Jeff Meddin – unsinkable. Has had any number of jobs. Keeps coming back.  And like a number of pros, Jeff is one tough sonavabitch. Beat cancer. Keeps on truckin’. Takes everything in stride.

Quite a tribe, eh? You won’t find such a diversity of skills and backgrounds, philosophers, executives, humorists and people who can talk to anyone in a plant, in many disciplines – that’s the mix that makes safety and health something special.