Tanks that leaked hazmats into WV river were never inspected 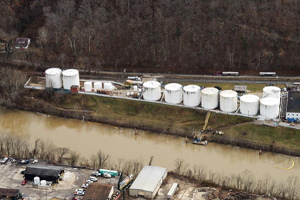 The U.S. Chemical Safety Board (CSB) reports it has thus far found no record of a formal, industry-approved inspection performed on any of the chemical storage tanks at Freedom Industries prior to the massive leak which occurred on January 9, 2014.

That finding comes from the CSB’s ongoing investigation into the chemical storage tank leak that contaminated the drinking water of up to 300,000 residents of nine West Virginia Counties.

Informal inspections may have occurred, preliminary findings indicate, but investigators have found a lack of appropriate engineering inspections with prescribed frequency and rigor of inspections.

The CSB commissioned an inspection of tank 396 and similar tanks at Freedom Industries, scanning the tank interior and the surrounding topography of the river bank. Investigators oversaw the recent extraction of metal for metallurgical analysis.

The investigation found that two small holes ranging in size from about 0.4-inch to 0.75-inch in the bottom of the 48,000-gallon tank 396 were caused by corrosion, likely resulting from water leaking through holes in the roof and settling on the tank floor. Furthermore, the CSB inspection found a similar hole penetrating the bottom of nearby tank 397, containing the same chemical at the facility, located in Charleston. Other tanks also showed multiple signs of pitting and metallurgical damage, investigators said. The growing corrosion in these tanks went unnoticed until the bottom of 396 was breached and up to an estimated 10,000 gallons of the chemical 4-methylcyclohexane methanol (MCHM), mixed with propylene glycol phenyl ethers, or PPH, made their way through the underlying mixture of soil and gravel under the facility and into the Elk River on January 9, 2014.

Investigator Lucy Tyler said, “While our investigation is still underway, it has become clear that Freedom Industries did not have a rigorous inspection program for these chemical storage tanks sited close by the Elk River and just upstream from the facility supplying water to hundreds of thousands of people.”

Self-policing is not preventing accidents

CSB Chairperson Rafael Moure-Eraso said a lack of thorough inspections and hazard reviews is an underlying root cause of many of his agency's investigations, along with the need for stricter regulations in areas where self-policing is not preventing accidents. "The Board looks forward to the team’s final report which will examine regulatory oversight of aboveground storage tanks in West Virginia and the U.S.”

The CSB released video of the tank dismantling activity in which high pressure water tools cut through the metal at various places, and extracted pieces for analysis. CSB Investigation Supervisor Johnnie Banks, who oversaw the activity, said, “I am confident the forensic data we will obtain will enable us to determine the exact cause of the corrosion and, we hope, determine how long it had been going on.”

"An accident waiting to happen"

Mr. Banks added, “We are also trying to pin down the installation dates for the tanks to review their manufacturing and service history. Whatever the governing regulations, and whatever the precise failure mechanism, companies have a responsibility to operate in a safe manner. Not inspecting corrodible steel aboveground storage tanks proved to be an accident waiting to happen.”

At their public presentation, investigators noted that the West Virginia America Water Company water treatment center, 1.5 miles downstream from Freedom Industries, serves 580,000 people in the state, including industrial and residential clients. Investigators noted the state’s Department of Environmental Protection identified the MCHM release at 11:15 a.m., but that the water company did not notify the public of the “Do Not Use” order until more than five hours after it became aware of the chemical release.

The West Virginia governor issued a state of emergency order that evening at 9:30 p.m. On January 10, 2014, the president declared that an emergency existed in West Virginia and announced federal assistance.

Investigators noted that the public continues to distrust declarations that the water is safe to drink. While there is some information available on the acute effects of MCHM and PPH, little is known about the chronic health impacts of exposure at low concentration levels. The chemical’s material safety data sheets (MSDSs), required by law, do not provide information on the potential health hazards to assist in the timely notification of water usage restrictions.

However, the CSB presentation cited data from the state’s Bureau of Public Health and the federal Centers for Disease Control, noting 369 patients were treated for possible exposure following the release into the drinking water, and 13 were hospitalized. Of these, 38% exhibited symptoms of nausea, 28.5% skin rashes, and 28% vomiting. Reported symptoms are consistent with known acute health effects of MCHM based on limited animal studies.

Chairperson Moure-Eraso noted the CSB investigation is moving along quickly and is a high priority of the agency. “Upcoming activities include the metallurgical examination of the MCHM tanks, computer modeling of the way in which the MCHM and PPH moved through the topography to the river shore, further assessment of public health impact, regulation of aboveground storage tanks, evaluation of water treatment intake systems and emergency planning and notification. This accident was a disaster of the highest magnitude, was preventable, and must be averted in any other community.”

The CSB is an independent federal agency charged with investigating serious chemical accidents.

Worker drowns after being knocked into river

Beyond Compliance: A Deeper Look into Safety Management Systems