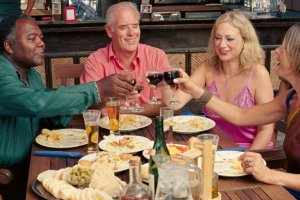 In a finding that should surprise no one, eating at both fast-food and full-service restaurants is associated with significant increases in the intake of calories, sugar, saturated fat, and sodium, according to a new study. The study, appearing online in Public Health Nutrition, finds on days when adults ate at a restaurant, they consumed about 200 additional total daily calories whether they ate at fast- food restaurants or at full-service restaurants.

Previous studies looking at restaurant food consumption have found that adults who reported eating fast food consumed more calories, fat, and sodium, as well as fewer fruits, vegetables and vitamins compared to than those who did not report eating fast food. Studies have also linked meals consumed at both fast-food and full-service restaurants with higher caloric intake.

For the current study, Binh T. Nguyen of the American Cancer Society and Lisa M. Powell of University of Illinois at Chicago used more recent data from more than 12,000 respondents between the ages of 20 and 64 taking part in the National Health and Nutrition Examination Survey 2003–2010 (NHANES). Participants were asked about visits to fast-food and full-service restaurants on two successive days.

“The United States is one of the most obese nations in the world, with more than one in three adult men and women in defined as obese,” said Dr. Nguyen. “Just as obesity rates rise, there’s been a marked increase in total energy consumption consumed away from home, with about one in four calories coming from fast food or full service restaurants in 2007–2008. Our study confirms that adults’ fast-food and full-service restaurant consumption was associated with higher daily total energy intake and poorer dietary indicators.”

The researchers say the larger adverse effect they measured on energy intake for some lower socio-economic and minority populations has policy implications. They say efforts to improve diet and reduce energy intake from restaurant sources could actually help to reduce racial and socio-economic disparities in Americans’ diets.