The self-driving system software in an Uber test car classified a pedestrian it was about to strike and kill first as an unknown object, then as a vehicle, and finally as a bicycle – whose future path was not certain.
Read More 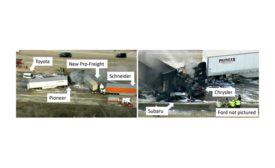 The National Transportation Safety Board’s (NTSB) preliminary report on a fatal traffic incident that occurred earlier this month in Illinois doesn’t contain analysis or name a probable cause. It does, however, include a step-by-step breakdown of the complicated event which shows how varying speeds, sizes and positions of the vehicles involved affected the outcome.
Read More

When the pedestrian bridge collapsed last week in Florida, workers were adjusting tension on the two tensioning rods located in the diagonal member at the north end of the span. That’s one of the findings of the National Transportation Safety Board (NTSB) team that is investigating the incident, which crushed cars and killed at least six people - one of them a bridge worker.
Read More

A 2016 highway accident in Kansas that killed six people and injured five vividly illustrates the need to implement safety improvements recommended by the National Transportation Safety Board (NTSB), the agency says. In that June 29 crash, a seven-passenger sport utility vehicle with 11 occupants was struck from behind by a semitractor-trailer on I-70 near Goodland, Kansas at about 2:15 in the morning.
Read More

Christopher Jensen
Traffic safety measures ranging from seat belt and drunk driving enforcement to design standards for cars and trucks “averted a public health disaster” by preventing about 5.8 million deaths in the U.S. from 1968 through 2015, according to a new study. The analysis found that without federal and state policies, traffic deaths annually would “likely have been in the hundreds of thousands rather than tens of thousands” in recent years.
Read More

The National Highway Traffic Safety Administration (NHTSA) announced the creation of a Compliance Assistance Program to help regulated entities - including vehicle and trailer manufacturers, equipment manufacturers, and dealers - comply with safety regulations as a means to promote safety on our highways.
Read More

The percentage of crashes involving drowsiness is nearly eight times higher than federal estimates indicate, according to the AAA Foundation for Traffic Safety. The travel organization is touting the study as the most in-depth drowsy driving research ever conducted in the U.S. using footage of everyday drivers.
Read More

The national opioid epidemic and the growing number of states legalizing marijuana is prompting the U.S. Department of Transportation’s National Highway Traffic Safety Administration (NHTSA) to launch a new initiative aimed at drugged driving. The agency says combating drugged driving has become “a top priority” in its bid to improve safety and reduce motor vehicle crashes on the nation’s roadways.
Read More

Safety enhancements address their needs
The Federal Highway Administration (FHWA) published new data today showing a record-high 221.7 million licensed drivers in the U.S. in 2016, including 41.7 million – or almost one in five – who are 65 years or older. This age group is growing faster than any other, and is far outpacing their teenage counterparts. The largest single-year percentage increase in licensed drivers that year was among those who are between 75-79 years old, increasing by 4.98 percent over the previous year. Except for five states – Michigan, Oklahoma, South Dakota, West Virginia and Wyoming – the nation saw increases among licensed drivers in 2016 compared to the previous year.
Read More

From the NIOSH Director's Desk

How do you talk about workplace motor vehicle safety?

Dr. John Howard
The NIOSH Center for Motor Vehicle Safety (CMVS) is taking up the challenge of communicating to employers and workers about the risks of driving for work and how to avoid motor vehicle crashes. Crash risk affects workers in all industries and occupations, whether they drive tractor-trailers, cars, pickup trucks, or emergency vehicles, and whether driving is a primary or occasional part of the job.
Read More
Previous 1 2 3 4 5 6 7 8 9 Next
Subscribe For Free!
More Videos