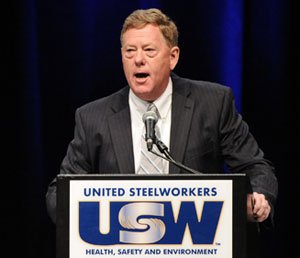 A former Cal/OSHA staffer frequently under fire for raising concerns about under-staffing and lack of resources at the agency has been named the 2015 J. William Lloyd Award winner by the United Steel Workers (USW).

Garrett Brown, who worked as a Cal/OSHA compliance officer and administrator for two decades, was honored earlier this month at the USW’s annual health and safety conference in Pittsburgh, which was attended by more than 1,500 union health and safety committee members and activists.

The annual award is given to an individual or organization outside of the USW for outstanding service in worker safety and health.

Brown, who eventually became the Special Assistant to the agency¹s head, retired last year, although he has remained active in the OSH field and has been an outspoken critic of Cal/OSHA.

According to a FairWarning report, Brown blasted the agency just weeks after leaving it in a report aimed at getting Cal/OSHA to increase its number of field inspectors and step up enforcement efforts. (Federal OSHA in its annual FAME evaluation reports of Cal/OSHA, and the California Legislative Analyst Office on March 13th, have confirmed the adverse impacts of understaffing and lack of resources on Cal/OSHA.)

Brown also filed a a whistleblower claim with the state auditor in which he accused the department that oversees the agency of mismanagement of funds.

A website launched by Brown, Inside Cal/OSHA, is aimed at documenting what Brown regards as the agency’s preferential treatment toward employers.

Since 1993, he has served as Coordinator of the Maquiladora Health and Safety Support Network, which includes more than 400 occupational safety and health professionals in Canada, Mexico and the United States. The Network provides free information, technical assistance and Spanish-language trainings to Mexican workers on the U.S. border and other workplaces in Mexico and Central America.

In 2007 he led a multi-national team of occupational health professionals who performed healthy surveys with striking Los Mineros union miners in Cananea, Mexico. Most recently, he has worked in Bangladesh to help implement the 2013 Accord on Fire and Building Safety between global union federations, Bangladeshi unions, and major international clothing brands and retailers.

Labor activist who chose to work within the system is outsider once more, and again crusading for job safety

ASSE to rcognize Dr. Tracey Cekada as Outstanding Safety Educator of the Year