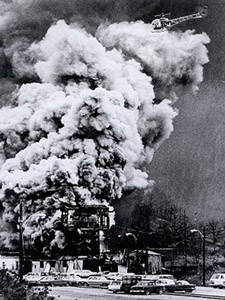 In 1968, a powerful explosion rocked an underground West Virginia coal mine, killing 78 miners. While the disaster's cause remains uncertain, the Farmington mine disaster was a flashpoint for reform after years of mining fatalities and injuries and a growing awareness of black lung disease. A year later, Congress passed the Federal Coal Mine Health and Safety Act of 1969. The act took effect on March 30, 1970 and was the toughest worker health and safety law of its time. It also ushered in a new culture in mining. In signing the new law, President Richard Nixon declared that it "represents a crucially needed step forward in the protection of America's coal miners."

The law was enacted on March 30, 1970. Subsequent laws improved mine safety and health even more, extending protections to metal and nonmetal mines and creating an enforcement agency under the Department of Labor -- the Mine Safety and Health Administration, or MSHA. On the foundation of the 1969 Coal Act, improvements continue to this day, including the 2014 rule to further protect miners from black lung disease, which has claimed thousands of lives.

The Act’s legacy has been healthier, safer mines and steady declines in fatalities and injuries. In 1970, the year the law began to take effect, 260 coal miners were killed in workplace accidents. In 2014, that number dropped to 16 - the lowest ever recorded.