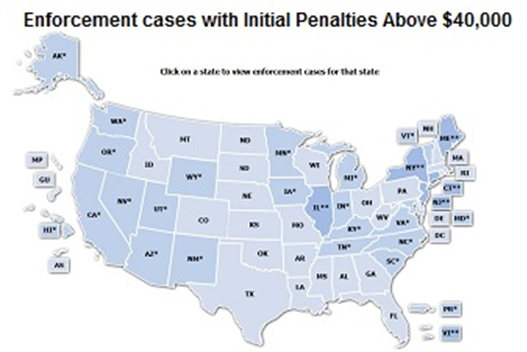 Want to see what your state-level OSH agency has been up to? Federal OSHA has a new webpage that shows state plan enforcement cases with initial penalties above $40,000, on a state by state basis. Site visitors can click on a map to get information about citations issued starting January 1, 2015. Cases are updated weekly and there is a posting delay to ensure the parties have been notified.

After a criminal investigation by California OSHA, the San Francisco District Attorney has brought manslaughter charges against the employer and foreman of a 51-year-old carpenter at Versaggi Construction who was killed in a fall in December 2012. For more information, read the Cal/OSHA news release*.

Twenty-two states or territories protect private and public sector workers with their own safety and health plans, approved by OSHA to be "at least as effective" as federal occupational safety and health standards. Five additional states and one U.S. territory have OSHA-approved plans that cover state and local government public sector workers only. Below are recent examples of enforcement cases from two State Plan states.