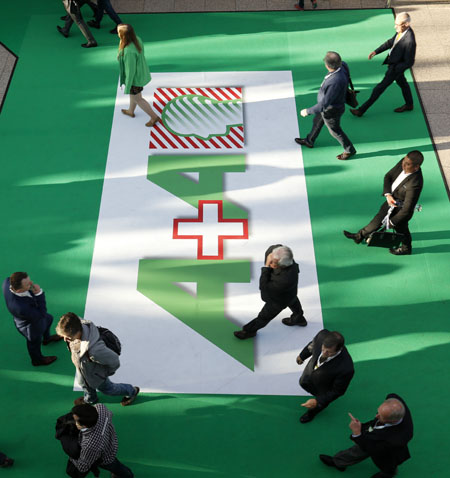 The digital workplace has introduced both exciting new possibilities and an unwelcome new dimension to the problem of work-related stress, according to Andrea Maria Nahles, Germany’s Federal Minister of Labour and Social Affairs. The key to dealing with both, she says, is flexibility.

Nahles spoke to an international audience of occupational safety experts at the A+A Trade Fair and Congress (Safety, Security and Health at Work) which wrapped up recently in Dusseldõrf.

In Germany, psychosocial stress has replaced musculoskeletal disorders as the primary reason for workers to take early retirement and draw government benefits, which results in a drain on the economy.

In the 1990s, the typical early “opt-outer” was a 58-year-old construction worker. “This has changed today,” said Nahles. “Now 42 percent of the early opt-outers have suffered mental disorders. Burnout. This is a complete transformation of reasons for early pension schemes.”

According to the German Pension Insurance Union (DGB) the pressure to remain accessible to managers and colleagues was cited as the key cause of the psychological stress.

(The term “burnout” – referring to a physical or mental collapse caused by  overwork or stress – was coined in 1974 by a German-American psychologist, Herbert Freudenberger.)

“Modern technology allows us to work anywhere and anytime,” said Nahles. “This is a radical change. The communication between colleagues no longer takes place at certain times of the day and in a certain place. Now, we are mobile in the truest sense of the word.

“We work late at night. We work at the office, our home office, even while traveling. We work in teams, but in changing project groups. We work with office neighbors on the same corridor but we also work with colleagues in other countries on other continents in other time zones -- thanks to digitization.

“This can be a blessing. Our work actually adapts to our needs. We have new opportunities to reconcile work and family, to get our life balance right.”

However, permanent accessibility has a downside: it mixes private and work life in a way that often produces stress.

“We know that long working hours now constitute the main reason for burnout. We know that stress is part and parcel of work and that you cannot actually delete it. Stress can also motivate people, if it occurs only during certain stages, but it can also turn into a factor that actually affects people.”

Nahles cited examples of companies who’ve changed their strategies in order to help their employees achieve a better life balance.

Automaker BMW has updated its classification of “mobile work” and offers flex time and a flexible workplace.

Another company allows its employees to leave in the afternoon, pick up their children from school and have some family time, then finish their work in their home-based offices. This arrangement required a change in union contracts, which had previously specified extra pay for what was regarded as night shift work.

“If they work until midnight, fine,” said Nahles. “If the employee decides to complete the job at night after having some private life then he will also forego add-on payments, extra payments for the night shift.

Nahles said flexibility and compromise will help companies meet staffing and productivity challenges, “not the anxious clinging to the status quo and making it permanent. Both sides have to agree on a joint shared solution.”

Work-at-home flexibility is not possible with all types of jobs, but Nahles has even seen some creative approaches to assembly line work, such as a manufacturing company’s use of shift planning to give employees a greater say in their scheduling.

Some firms have also banned business emails after 7 pm in order to help employees to disconnect from their jobs. That dovetails with “anti-stress” legislation proposed by Germany’s metalworkers union that would prohibit companies from contacting employees in their off  hours.

While Nahles has commissioned a study to look into the feasibility of such legislation, she emphasized at A+A that the government can provide the political backing and create a framework, “but we cannot create a federal law that caters to all these differences and facets. It’s possible to actually sort this out on the collective bargaining level.”

Visits to Google, Facebook and Airbnb headquarters where “everyone explained to me that they’re not really employers, they’re platforms” left Nahles less than impressed.

“The Google campus was nice. The roof garden of Facebook was really nice. And it was stressed time and again that there is a free lunch available – people can eat and drink all day long – and the offices were really neat, but does it do good for the remaining hundreds of thousands who don’t enjoy these offices?

“Hundreds of thousands of people who work with this platform work in a dependent self-employment and they’re not really getting rich, so they don’t earn enough money to actually provide for their own old age pension. This scheme does not go with a social welfare state (like Germany’s). This is why I’m saying we have to put down the throttle. We don’t want to copy Silicon Valley. We want to find our way, break new ground that is compatible with our social welfare state. And this is the actual challenge with social policy.”

She said some of the “platforms” are not investing in their employees.

“Nor are they paying their taxes here in Germany – neither Google nor Airbnb – so we cannot jump in as a state in order to help. This is not a proper business scheme – not for anyone, apart from those who operate it and provide this platform.”

The robot "has escaped from his cage"

Nahles also addressed the increasing use of robotics, and its effect on jobs and occupational safety  and health.

“The robot is no longer in the cage. He has escaped from his cage and he’s sitting right next to his colleague, his human colleague. He’s doing monotonous work. Work that was done by a human the day before yesterday.”

Industry leaders have told her that, while robots have increased their companies’ productivity, they do not expect them to replace humans.

“In some areas, certain jobs will be lost, but this will bring new jobs, other types of jobs. I’m convinced of this. This is why we need to make sure that our colleagues, our employees – both male and female – can be accompanied during this transformation, so that it turns out to be positive.”

Skill-building will be increasingly important going forward, and could help Germany’s one million long-term unemployed fill some of the 600,000 jobs that are vacant because they require certain skillsets.

“I do not know for sure what the job of the future will look like in the various industries, one thing I know for sure: we will require even more skilled and qualified workers than today.”

Nahles said she recently worked with the federal labour agency, the works council and the management of a company to develop an eight-module program designed to help employees build skills.

Beyond enhancing skills, filling vacancies – which was cited as a major concern of employers in a recent study – may require fundamental changes in corporate cultures.

“When you take a closer look at why employees change jobs, it is often due to leadership, culture and the environment, and not due to salaries or wages,” said Nahles.

Korea strives to focus its safety culture on prevention

Great potential to reduce exposures and injuries, but there are concerns

How to lower your stroke risk

Work, stress, and health: Help NIOSH plan the next 25 years