Why blocked exits at Dollar Tree were a big deal

It was around 4:30 in the afternoon on March 25, 1911. Several hundred workers, mostly young women, were nearing the end of their Saturday shift at a blouse or “shirtwaist” factory in New York City. No one is quite sure how, but a massive fire erupted and spread quickly.

Most of the doors had been locked by the factory owners, probably to prevent theft and keep workers from taking breaks. In the end, 146 died, and this horrible event went down in history as the Triangle Shirtwaist Factory Fire.

The public outrage from this tragedy served as the basis for many of the worker safety reforms that we take for granted today, in part because of the mark it left on Frances Perkins, who would later serve as the secretary of labor under President Franklin D. Roosevelt.

Frances was visiting a friend who lived near the factory when the fire erupted. They heard the commotion and rushed outside, and then watched in helpless horror as people hurled themselves off the ledges of the building.

More than 100 years later, the Department of Labor continues the fight to protect workers, especially the most vulnerable. Like Frances, we want to make sure that this kind of catastrophe never happens again.

But unfortunately, problems with blocked exits and passageways are not remnants of the past. And while these are old problems, we have to tackle them in new ways. 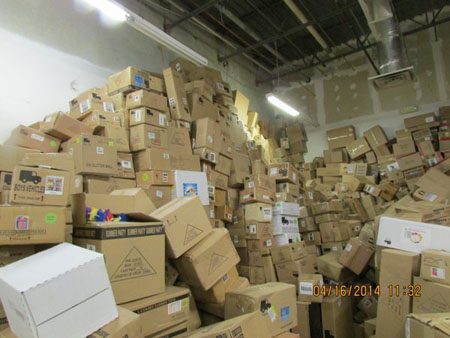 For example, over a number of years the department’s Occupational Safety and Health Administration has received complaints from employees of Dollar Tree stores about blocked emergency exits and obstructed access to exit routes and electrical equipment. In the worst case scenario, if a fire were to erupt or there was another emergency, workers would not be able to reach the emergency exits or turn off the electricity. (At right: Congested conditions in the back storeroom of a Texas Dollar Tree store.)

OSHA addressed these complaints one-by-one, store-by-store. But this was not the most efficient way to handle a serious problem that was occurring at stores throughout the country. In 2015, OSHA and my office, the department’s Office of the Solicitor, decided to address the big picture. We would no longer be satisfied with individual Dollar Tree stores correcting these problems; we wanted Dollar Tree to correct these problems nationwide.

At the height of this problem in 2015, 13 different inspections of stores throughout the country resulted in citations for blocked emergency exits, obstructed exit routes, etc. So we approached Dollar Tree about working together on a solution to these problems – a solution and an agreement that would cover all of its stores under federal OSHA jurisdiction.

In the end, after months of negotiations, the Department of Labor and Dollar Tree reached an agreement to implement a comprehensive safety and health program that will have a far-reaching, positive effect at 2,400 stores. The agreement called for Dollar Tree management’s commitment to correcting these problems, but we also know employee participation is especially important because it allows employees to have a say in how their workplaces can be made safer. The company’s program will incorporate management commitment, employee participation, hazard identification and control, education and training for employees.

We hope workers will feel empowered to speak up through the new program and the agreement also requires Dollar Tree to make available a toll-free number so employees can anonymously report safety and health issues. Dollar Tree also agreed to publish a corporate newsletter covering safety and health issues. And third-party monitoring will help ensure appropriate safety measures are in place.

We think that Frances Perkins would be proud.

Editor’s note: To report emergencies, unsafe working conditions, safety and health violations, to file a complaint, or to ask safety and health questions, call OSHA at 1-800-321-6742 or find your local office here.