This website stores data such as cookies to enable important site functionality including analytics, targeting, and personalization. View our privacy policy.
Home » Opioid addiction increasing in U.S.
ConventionsHealthOnly on the Web
From the NSC show: 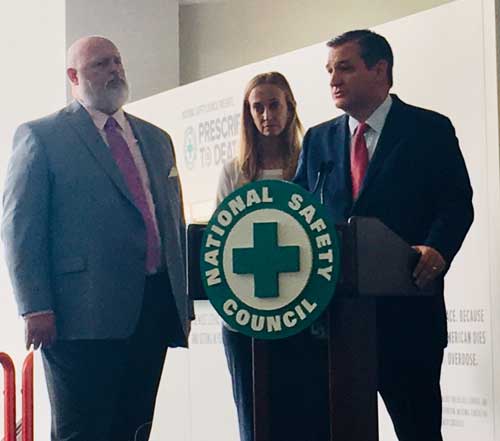 Opioids are “the worst drug crisis in U.S. history,” said Deborah A.P. Hersman, president and CEO of the National Safety Council, on Monday.

“Employers are on the front lines,” she said. “Today we face an everyday killer, one many employers never expected, and one that can no longer be ignored. More than 75 percent pf people who struggle with addiction are in the workforce. An NSC study found seven out of 10 employers had been impacted by prescription drug use among their employees.”

Hersman talked about the new NSC campaign called Stop Everyday Killers and website: www.stopeverydaykillers.org. They are giving out free warning stickers to place on your insurance cards and prepaid mailers to get rid of any prescription drugs you might have in your medicine cabinets. Visit the website to request them.

One in three people taking legally prescribed opioids don’t realize that their medication is an opioid drug, she said.

Senator Ted Cruz of Texas was also there Monday to unveil the opioid memorial. He has a personal connection to the crisis — his sister Marian Cruz died of an opioid overdose after battling addiction most of her life. She became addicted after she received a prescription for painkillers from her doctor after being in a car accident.

“Opioid addiction is an epidemic that touches every family in America… it doesn’t discriminate based on gender or socio-economic class,” Cruz said.

Remembering workers who died on the job

Opioid epidemic is increasing rates of some infectious diseases