Cave-in and struck-by: Mass. worker exposed to both hazards in one trench 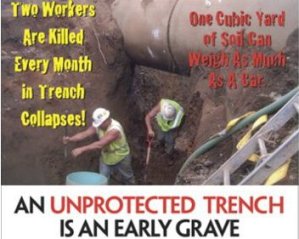 A Boston-based contractor faces $161,000 in fines after an OSHA inspector saw one of its employees exposed to both cave-in and struck-by hazards while installing a watermain. An employee of Walsh Corp. was working in an unprotected straight-walled trench more than 5 feet deep that lacked protection to keep its walls from caving in. The pavement around the trench was undermined and not removed or supported to prevent it from falling into the trench; the trench lacked a ladder or other safe means of exit; the worker lacked head protection against falling debris; and the competent person on-site, who had the knowledge to identify and the authority to correct these hazards, did not remove the employee from the unprotected trench.

Brenda Gordon, OSHA's area director for Boston and southeastern Massachusetts, said the maximum allowable fines were being proposed against Walsh because the trench walls could have collapsed in seconds, engulfing the worker in tons of soil and debris.

OSHA standards require that trenches or excavations 5 feet or deeper be protected against collapse through shoring, sloping of the soil or use of a protective trench box. Detailed information on trenching and excavation hazards and safe working procedures is available at www.osha.gov/SLTC/trenchingexcavation/index.html.