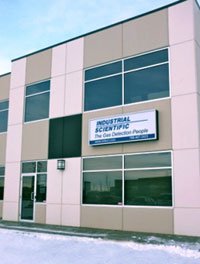 Industrial Scientific Canada ULC announced today that it has moved to a new, larger location in Sherwood Park. The address of the location is Unit #140, 120 Pembina Road, Sherwood Park, Alberta, Canada.

As the global leader in gas detection, Industrial Scientific has experienced tremendous growth over the last decade. With particular increased growth in the Canadian market, the Sherwood Park Warranty Repair and iNet Fulfillment Center outgrew its previous location that it occupied since 2006.

Double the size of the previous space, the new facility is conveniently located just off Pembina Road in Sherwood Business Park. The new service center has increased technician space to support the continued growth of iNet® Fulfillment which is a team that supports the growth of iNet – Gas Detection as a Service. The new space also has a larger training room, as well as more room for stocking inventory to better support the needs of Canadian customers.

Industrial Scientific Canada ULC was incorporated in 2006 to more effectively serve the Canadian market while working to preserve human life on, above and below the earth. The new space not only increases Industrial Scientific’s ability to serve its customers, but enables the company to gain a better understanding of the local market and how to address their specific gas detection needs.

Industrial Scientific Corporation is the world’s leading provider of Gas Detection as a Service. With more than 850 people working in 20 countries, Industrial Scientific is dedicated to eliminating death in the workplace by the end of this century. Achieving this goal requires dedication to delivering highest quality and best customer service in all transactions. Industrial Scientific also focuses on providing analysis of data from equipment use and maintenance to identify problems before they happen. Industrial Scientific has operations based in Pittsburgh (USA), Arras (France), Dortmund (Germany) and Shanghai (China). The company provides technical services to customers from local service centers around the world, and has additional offices in Australia, Bahrain, Brazil, Canada, Czech Republic, India, Indonesia, Italy, Mexico, Netherlands, Poland, Qatar, Saudi Arabia, Singapore, United Arab Emirates and the United Kingdom. Industrial Scientific is the parent company to Oldham (www.oldhamgas.com) and Predictive Solutions Corporation (www.predictivesolutions.com). For more information, visit www.indsci.com.