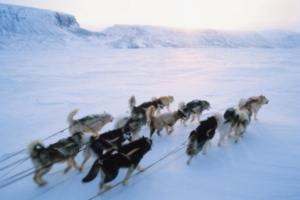 When the Seavey mushers take to the Iditarod trail in March, they will be making history — quite possibly in more ways than one. Three generations of Seaveys will be racing the Iditarod together: 74-year-old Dan, 52-year-old Mitch and 24-year-old Dallas, all hoping for victory.

James and Rosanne Keller, representing J. J. Keller & Associates, Inc.®, have announced their sponsorship of the Seavey/J. J. Keller Iditarod Racing Team for the sixth consecutive year. They will be the exclusive sponsor for Dallas Seavey.

To date, 70 mushers have signed up for the 2012 Iditarod, which will begin in Anchorage, Alaska on March 3rd and end nine to thirteen days later in Nome.

With three Seaveys on the trail, competition is sure to heat up. Mitch and Dallas have raced closely before, with Dallas placing 8th and Mitch placing 10th in the 2010 Iditarod. Only time will tell if youth or experience will prevail in 2012.

The 2012 race will be Dallas’ sixth run to the famed Burled Arch. In that time, he has racked up a number of Iditarod records:

Dallas is busy getting his team ready for the 2012 race. Of his team, Dallas said, “It will be an exciting race. I’m totally amazed by these dogs. They are going to do well.”

James J. Keller, President and CEO of J. J. Keller, has been following the team’s training and is in frequent contact with Dallas. “Dallas has a very strong veteran team and is training for a championship in 2012,” Keller said. James and Rosanne Keller will be in Nome to welcome the mushers across the finish line.

The 2012 race is the nineteenth Iditarod for Dallas’ father, Mitch Seavey. Mitch has nine top ten finishes and won the 2004 Iditarod. He was withdrawn last year due to an injury while on the trail.

Dan Seavey provides a strong foundation for Seavey mushing. He helped found the Iditarod in 1973 and finished third in that race, and fourth a year later. According to his race bio, he is racing the 2012 Iditarod to emphasize the Iditarod National Historic Trail Centennial.

The Iditarod Historic Trail Centennial (January 2008 to October 2012) commemorates events of historical significance to Alaska, from sled dog travels to gold mining to the designation of Alaska as a territory in 1912. The year 2008 marked the 100th anniversary of the Alaska Road Commission efforts to open an overland route from Seward to Nome.

The Iditarod Historic Trail Alliance’s “Centennial Team” will participate in the Iditarod Dog Sled Race ceremonial start in Anchorage. Dan Seavey will be the first out of the starting gate with a historic freight sled to commemorate the thousands of gold seekers who mushed to the Iditarod gold fields a hundred years ago. His 15-year-old grandson Conway Seavey will ride with him during the ceremonial start.

After meeting Dallas Seavey in Seward, AK, in 2006, James and Rosanne Keller created the J. J. Keller Extreme Transportation Solutions sponsorship to celebrate one of the original forms of transportation and to salute trucking professionals who dedicate themselves to transporting needed goods. To learn more about J. J. Keller’s sponsorship of Dallas Seavey, view weekly training videos and photos sent from Dallas, and follow the 2012 race, go to www.jjkeller.com/iditarod.